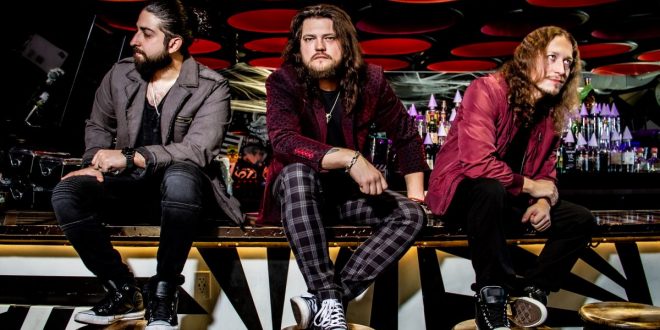 Radiofix is a hard rock trio from Phoenix, Arizona. True to their band name, the band’s 2013 debut, Already Gone, encapsulated a statement of modern rock music’s power as a still-vital asset in repairing the monotony in radio and the general music industry. In the seven years they’ve been together, the band has maintained a steady lineup of singer-guitarist Daniel Martin, bassist Benjamin Thurston, and drummer Jorge Gutierrez Jr. Their live presence continues to contribute equally to their identity, with frequent gigs on the bar circuit and lengthy, yet engaging sets.

Now, the band has launched into 2020 with their latest single, “All Night Long.” Though the song’s heaviness is slightly scaled down in favor of a prominent organ-driven feel, that is still effective nonetheless. Martin’s vocal tonality is strong throughout the verses, melding Eddie Vedder-esque dexterity and heartland sincerity. Once the chorus hits, his vocals surge through soulful grit – a type of understandable strain that lends itself to rock n’ roll purity. Another of the song’s highlights comes from the guitar solo in its halfway point, as it is carefully and melodically constructed, but with emphasized breathability benefitting the balance of the general instrumentation. The scope for organic, hearty music has a lot of potential this year, and Radiofix is truly poised to further reinvigorate the stature of modern rock for the new decade.

I come from a family who is passionate about all things music. I learned to sing at an early age, and by 13, had my very own Fender Strat guitar. I tried my hardest at learning all that I could. Because I was born with cerebral palsy, I had to teach myself an adaptive playing style. I learned to write and record my own music, despite these difficulties. In college, I started making great use of my writing abilities by reviewing music, as well as copy editing. I guess it's best to stick with what you know, while welcoming a fair challenge at the same time.
Previous Sea.Hear.Now announces 2020 lineup
Next Diane Patterson’s “Somewhere There’s A Song Still Singing”