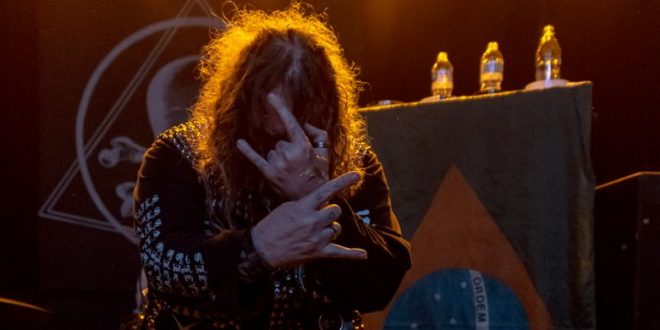 Soulfly are currently out on The Summoning North America 2020 tour in support of their latest album Ritual. With direct support from Toxic Holocaust along with Sergio Michel and Systemhouse 33. On Saturday, March 29th, Soulfly rolled into Brooklyn, NY and took over Saint Vitus Bar. The show had sold out so fast that a second show had to be added. On Monday, March 2nd the bands all returned to Brooklyn’s Saint Vitus Bar for a second sold out night.

I was lucky enough Monday evening to somehow get a ticket super last minute, with early show time and me getting in like I said sure last minute, I had unfortunately missed the first two bands, Systemhouse 33 and Sergio Michel. When I did finally get inside the venue, Toxic Holocaust was just getting ready to kick off their set. This was lucky for me because I did not want to miss a second of their set, I always make it a point to catch Toxic Holocaust live when they’re in my area. Still burning hot from the release of Primal Future 2019, Toxic Holocaust spared no expense in delivering a powerful dose of their blackened thrash insanity. With a setlist that solely focused on their old material, actually if I’m not mistaken there wasn’t one track off of Primal Future 2019, however, Joel Grind and co threw down heavy as always with a number of classics tracks such as “Acid Fuzz,” “War Is Hell,” “The Lord Of The Wasteland,” “Nuke The Cross” and “Bitch.” This power trio delivers live just as they do on recorded tracks, raw aggression mixed with clean instrumentals.

After heading out last year on a headlining tour of much larger venues that included New York City’s Gramercy Theater. This year Soulfly’s The Summoning tour is hitting much smaller venues creating a much more intimate environment, and thats exactly what Saint Vitus Bar offered up for their loyal fans who packed into the venue wall to wall and arm to arm.

Following Toxic Holocaust live is no easy task, but Soulfly like Toxic Holocaust brought their A game strong. After taking the stage Max Cavalera greeted a few fans with hand shanks then wasted no time diving right into the classics. As Max summonsed the crowd saying “Brooklyn jump da fuck up,” thats just what the crowd did, going completely ape shit as Soulfly opened their set with the intro to “Jumpdafuckup” that played right into “Eye For An Eye.” At this point anyone at the front of the stage was just simply being crushed. As for me with camera in hand getting crushed against a stage that reaches my kneecaps midway, it was time for me to take refuge to the back of the crowd and enjoy from a far. Fans were treated too a well spread setlist that tapped nearly every album in their catalog. The bands relentlessness attack hit the crowd with full force throughout the entire set hitting fans with such classic tracks as “No Hope=No Fear,” “Frontlines” and “Rise Of The Fallen” before ending their brutal assault with “The Prophecy.”

Having Soulfly play at Saint Vitus Bar made for so much more of an experience. The intimacy that comes along with the smaller venues added with a strong knit metal community is worth much more.

NewYork Based Photographer. Music Enthusiast with a background in Graphic Design. Whether I'm shooting a live event or just out wondering the streets its about capturing the moment.
Previous Live Review: Mt. Joy at Scotiabank Arena in Toronto, ON (03.03.2020)
Next All Hail The Yeti Gears Up for Beast Coast Monsters Tour with Life of Agony and Doyle

In This Moment have released their seventh album Mother, today March 27 via Roadrunner/Atlantic. The album is available here. Ahead of …