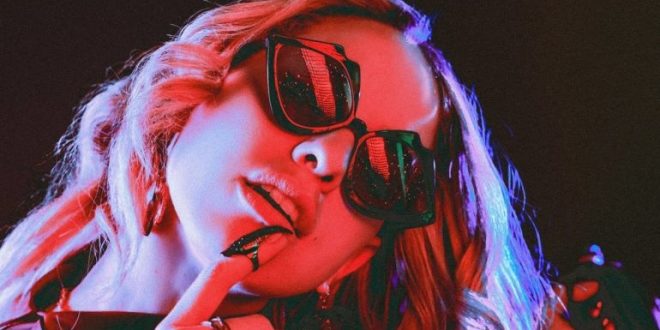 MOONZz (Molly Williams) is an emerging Los Angeles-based singer/songwriter. Debuting with her 2015 single, “Satisfy,” she has accumulated over 50 million streams in all, thanks to coverage in such acclaimed publications as Billboard, Noisey, OnesToWatch, V Magazine, and Earmilk. Following two successful EPs over the next few years (2016’s Trust Cycles and 2018’s Aftershock, respectively), Williams built a high-profile live presence as well, gracing the stages of Red Rocks, Rockwood Music Hall, and Coachella. Now, she aims to tackle new ground with her current single, “Runnin.” It is the lead track off her upcoming EP, Modern Ritual, which is slated for release March 6th.

I caught up with MOONZz to discuss the genesis of the project, the significance of her new single, as well as what she has learned about herself amidst continued success.

Your project is inspired by phases of the moon. Did you start the idea for it on a clean slate?

Yeah! When I started the project, I liked the idea of no one knowing who I was, so there was kind of this elusiveness to it which was fun for me (laughs). I just wanted to have a fresh start with this dream-like moniker, and it turned into this persona. I’ve been asked if the persona is a totally different person than me, and I don’t feel that way. I think of it as a safe space for me that doesn’t have a full attachment to my name, but is something I can still build off of.

When you were growing up, which artists did you listen to that made a big impression on you?

Growing up, I listened to a ton of Fiona Apple and Tori Amos since I play piano. To me, they were badass female musicians who I just thought were incredible. With Fiona Apple, her timbre brings out a kind of vulnerability, and her storytelling is otherworldly. I also love Lauryn Hill and Erykah Badu – their fluid approach to harmonies, and how nothing about them felt too stoic. Those were qualities I’d wanted to put into my music, the way they flowed so effortlessly.

In 2015, you made your debut with the song “Satisfy.” How did it feel initially to receive that kind of response?

It felt incredible since it was the first song I put out under the MOONZz name. It was such an empowering song for me. I wrote it with my friend Cody in the summer of 2014. He had just moved here from Texas and was so eager to write. We wrote a ton of music and with “Satisfy,” we probably put that together in an hour. It was just the vibe in that moment. When I perform live, I do a lot of vocal manipulation with a Chaos pad. I know Jonny Greenwood from Radiohead also uses that a lot. I was working out this looping song, just playing around with my voice in a lot of different ways, and it just became this anthem for me. I just had this powerful feeling that whole time, and I wanted that to be the foundation of my music. When I put “Satisfy” out, I didn’t really think much of it. I said, “Here it is; take it for what it is.” Then, one of the music supervisors at Victoria’s Secret reached out to me directly on SoundCloud and she wanted the song for a commercial, which was such a trip (laughs)! I remember being like, “What is happening right now,” and the response just exceeded expectations.

After that single, everything just took off for you. That inspired the Trust Cycles EP in 2017, more soundtrack placement, and a lot of high profile shows. In general, how do you translate those musical elements into your live performance?

It varies from show to show. Usually, it’s me playing synths and doing vocal manipulation with the pad that I have, and then I have a keyboardist who launches the tracks and plays keys for specific songs. Whether it’s playing with synths or keys, I definitely try to show that there’s a large involvement with my music – that I do piano and vocal stuff live. They’re building blocks for what I know is going to be a big show in the future.

By 2019, that was the Modern Ritual era. At one point, you’ve experienced a ton of self-doubt, even though you were aware of all the things you were grateful for, where you were kind of like, “Who am I? What exactly is going on here?”

I think you nailed it. That’s the question all artists have. “What am I really doing,” or “Do I have the same connection to this that I did when I started out?” I’ll admit that “Runnin”, the song on my new EP, is actually one of my oldest songs – from three years ago – which is crazy to me (laughs)! But I rewrote the song and reworked the lyrics around. That was my process – to trust myself at that moment, and to figure out how to really write about trust. At the time, it may seem like a lot of your songs might feel old to you. You may feel like there’s a waiting game, you have to be patient, and maybe there’s that feeling of, “What are fans going to think?” and “How’s everyone going to feel about this?” But you have to come back to yourself, remind yourself of the emotions attached to your songs, and why you wrote them in the first place. With every album, every show, and even every interview, it really makes you dig into the more vulnerable parts of being an artist. It’s important not to let those things completely define you. You’re just peeling back some layers, and reassuring yourself of why you started this. It’s about letting the universe do its thing, and recognizing that it’s your calling to do this every day.

Part of the reason for that was having the wrong kind of people around you. Was it a matter of simply getting rid of negative energy, or was there more to it?

I think that as I’ve grown, and as I’ve gotten to know myself more, it’s important that I choose who I surround myself with. I’m a positive person, but sometimes I feel like I attract people who aren’t of good influence. Also, there are people I’ve known my entire life that I don’t necessarily have to keep as close. So, these last few years, I’ve made sure to check in with myself every fifth month or something and just ask myself whether the people I’m spending time with are bringing joy to my life. That’s all part of the journey.

Your latest single, “Runnin”, is representative of it as an anthem of resilience. How did it come about originally?

I wrote it a few years ago with my friend Ryan Malone. At first, we looped the opening vocal line, just trying to figure out what to do with it, and then all that we eventually did in that entire session ended up getting deleted. So, we actually came back to it about a year later. It was crazy. I don’t know how we remembered it after so long (laughs). When he started messing with it again, I had this moment where people were kind of chipping away at me, and I had to prove to myself that I could do this and power through. That’s how the idea for the song was reimagined. Yeah, it’s super anthemic. There are always people who are going to be judging you, or trying to shape you into someone else, but you just have to see yourself for who you are and run with it. I wrote it as an anthem for myself, but I hope that it resonates with those who are also struggling.

For years, there’ve been jokes about how manufactured pop music has become especially in the last decade. But I feel that you’re one of those artists who aims to widen the envelope, not only in terms of space around the instrumentation, but lyrical relevance as well. In your opinion, where do you see pop music going in 2020?

First of all, I appreciate your compliment; that was really sweet. Thank you. While there are artists like Billie Eilish who, like you said, are widening that sonic envelope, there is always going to be that very “structured, safe, but you know it works” pop music. But I think now, it’s going a little left of center, with more surprise, more shock, and less predictable choruses. There’s no longer that straightforward pattern of a verse, then pre-chorus, then chorus, then bridge. Obviously, hip hop and pop are dominating right now, but I see more people bending them into whatever they want. That’s the future of music – not playing it safe, but also not worrying about what people think, and instead, tapping into how people feel.

Over the years, you’ve experienced tremendous personal and emotional growth. You’re a much stronger person, you’re back in touch with your creativity, and on top of that, you found your husband. Looking back, what have you learned about yourself, both as a musician, and as a person?

The biggest thing I’ve learned is that I deserve love. In my earlier music, there was always an angle of not being wanted for who I was, and not wanting to touch or be near anyone, and that’s after being rejected in many of my past relationships. But the last EP, and this new one, reflects how I’m finally getting what I know I deserve. I’ve also learned more about my perseverance when it comes to my music. Even if I didn’t get the reaction that I wanted the first time around, the goal is to keep pushing forward and creating. I figured out how to be more confident in the studio, recognizing my strengths as a writer, but also fine-tuning both what I’m not great at, and what I know I’m good at. And I’ve noticed the reception not only with music people, but with my friends, and other people I hold close in my life.

I’d be nothing without your support, listening, and sharing my music. But also, I want you to know that whether you’re going through a bad breakup or a big transition in your life, there is light at the end. I’m always here as a resource and guide so feel free to reach out whenever. I can’t wait to release the EP, and I’m super excited!

I come from a family who is passionate about all things music. I learned to sing at an early age, and by 13, had my very own Fender Strat guitar. I tried my hardest at learning all that I could. Because I was born with cerebral palsy, I had to teach myself an adaptive playing style. I learned to write and record my own music, despite these difficulties. In college, I started making great use of my writing abilities by reviewing music, as well as copy editing. I guess it's best to stick with what you know, while welcoming a fair challenge at the same time.
Previous Single Review: Dan Ashley “Lucky Stars”
Next Hatebreed Announce 2020 U.S. Headline Tour Dates