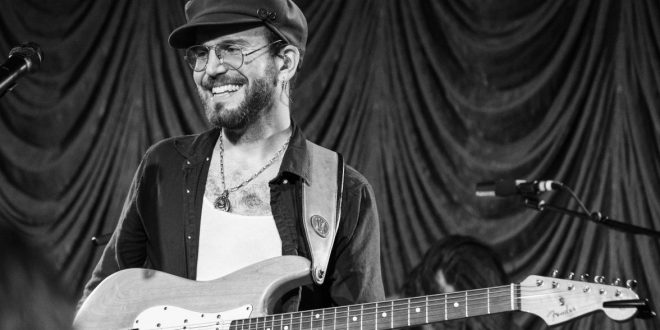 Feature: Three nights on the road with Theo Katzman

The best way to see a multi-instrumentalist like Theo Katzman is to do a multi-show, multi-city run. Katzman’s 37-city North American tour started in Seattle, WA, and ends in Montreal, QC. I was fortunate enough to see the Philadelphia, Brooklyn, and Boston shows, all of which sold out. You may know Katzman as the drummer/guitar player/vocalist from the funk band, Vulfpeck, but he’s released several solo albums as well, his most recent being- Modern Johnny Sings: Songs in the Age of Vibe.

The first night of my three-show run started in Philadelphia at The Foundry, where Katzman played to a sold-out 450 person capacity show. Katzman’s band is made up of friends of his that also happen to be part of other well-known bands. Lee Pardini (Keys) and Trevor Menear (Slide Guitar) are part of the band Dawes.  Jordan Rose (drums) plays with Caleb Hawley and also occasionally plays drums for Dear Evan Hansen on Broadway. And finally, playing bass, is one of the top ten bass players in the world- Joe Dart of Vulfpeck and Fearless Flyers.

Because Katzman’s band is made up of so many talented musicians, each show ends up being a little different, even though the setlist stayed mainly the same. Between the energy the crowd brings and the fact that Katzman gives each musician their moments to shine during the set, each city had a different feeling to its show. Even though Katzman is a multi-instrumentalist, he only played guitar and the keys during his solo set. He left the drumming to the talented Jordan Rose.

Starting in Philadelphia, Katzman stated that it was the largest Philly audience he’d ever played, and the crowd lived up to its reputation as the City of Brotherly Love by showing the love. Katzman was all smiles the whole show, and it looked like he was having a lot of fun. One of the best parts of the show was when Katzman interacted and connected with the audience. Whether it’s greeting long time fans he spots in the crowd or leading everyone in the venue in a three-part harmony sing-a-long, he makes a genuine connection with people.

Night two for me was another sold-out show at the 1,800 capacity Brooklyn Steel in Brooklyn, New York. There’s something magical about a crowd of 1,800 people singing every lyric to songs that were just released. Katzman spoke of his worries that some of the songs on his new album might be polarizing to his fans since they could be considered a little controversial, but instead, it appears that they have brought people together as he had intended. Three songs in particular tackle some of the issues going on in our country today including, “You Could be President,” “Like a Woman Scorned,” and “(I Don’t Want to Be a) Billionaire.” Katzman’s lyrics put into words what a lot of people might be feeling, and I think that resonated with his fans. He speaks of teachers deserving living wages, how women are viewed in society, and how the current president doesn’t have the respect that he should towards the people of his country. However, his witty lyrics and upbeat songs portray the message in a way that connects with people. Not only were they not polarizing, but they ended up being crowd favorites. The sold-out crowd that night in Brooklyn Steel gave him such an ovation at the end of the show that it visibly humbled Katzman.

The third night found me at the sold-out 1,000 capacity Royale in Boston, and from the moment the band took the stage I knew that it was going to be the wildest of the three concerts. The crowd’s energy level rose to an intensity that I had not seen in the other two cities. Even Katzman commented on it at one point thanking the audience for their energy and stating that it was a two-way energy exchange. My third and final show was one of the best because of it. Everyone on stage just looked like they were having a great time, smiling, and interacting with each other and the audience. One of the unique parts of a Theo Katzman show is when he lets his very talented band members have their moment in the spotlight. They all get a minute or two to play a solo at different points during the show, and you can see the awe on Katzman’s face as he watches the audience react to his talented friends. The crowd favorite is always Joe Dart when he plays his bass solo, or pretty much whenever Joe plays a solo riff. The fans in Boston lost their minds screaming, and it just pushed Dart to amp up the energy.

The Boston show was an excellent choice to be my last show, as I felt like it ended on a high note.

To see Theo Katzman on tour, click HERE for tour dates and tickets.

Fun Loving Music Photographer and lover of live music in general. I am most likely to be spotted with a coffee in one hand and a camera in the other, somewhere in Philadelphia, New York City and everywhere in between. For more of my music photos: http://myphotos.bellemorephotography.com/
@bellemorephoto
Previous Review: Razor Candy’s Self-Titled EP
Next Gallery: joan at Moroccan Lounge in Los Angeles, CA (02.27.20)