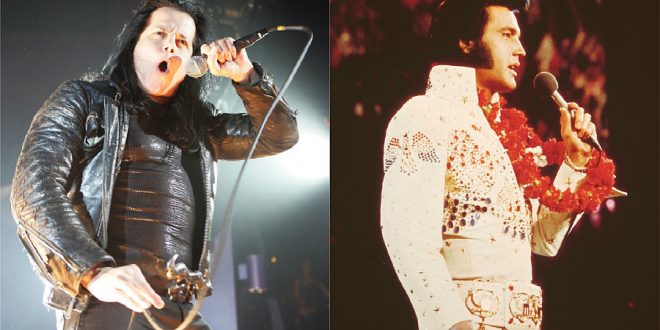 More than five years after Glenn Danzig first revealed plans in 2014 to record a covers album of Elvis Presley songs, the Misfits frontman will release the long-awaited covers LP.

Danzig Sings Elvis will be released April 17th via Cleopatra Records, in a post on Thursday via Danzig’s facebook page,  the album arrives a bit later than it’s initially promised fall 2019 release.

In a 2015 interview with Rolling Stone , Danzig said that Presley was among his chief musical influences. “Elvis is actually kind of how I got into music,” Danzig said at the time. “When I was a kid, I was cutting school pretending I was sick and I would lie at home watching old movies, and Jailhouse Rock came on with Elvis. I was like, ‘I want to do this. This is great.’ And that’s how I veered to music.”

“The brand new studio album from punk/metal icon and powerhouse vocalist Glenn Danzig paying tribute to Elvis Presley!Features 14 unforgettable interpretations of well-known Elvis classics and unheralded deep cuts that will thrill fans of both of these kings of rock music!Highlights include Danzig’s sinister take on “Fever” and a truly haunting version of “Always On My Mind!”Danzig is no stranger to working with American music royalty having written songs for both Johnny Cash and Roy Orbison!Available in a special digipak for CD and on vinyl in a deluxe gatefold jacket!”

Danzig has also scheduled two special live performances for late April in Los Angeles and San Fransico. “These will be small, intimate, seated performances, as Danzig wants to try to capture an old Vegas nightclub atmosphere.”  Stay tuned as details for the late April shows will be announced next week.

NewYork Based Photographer. Music Enthusiast with a background in Graphic Design. Whether I'm shooting a live event or just out wondering the streets its about capturing the moment.
Previous Gallery: Rex Orange County at Stubb’s Bar-B-Q in Austin, TX (02.24.20)
Next Review: Razor Candy’s Self-Titled EP