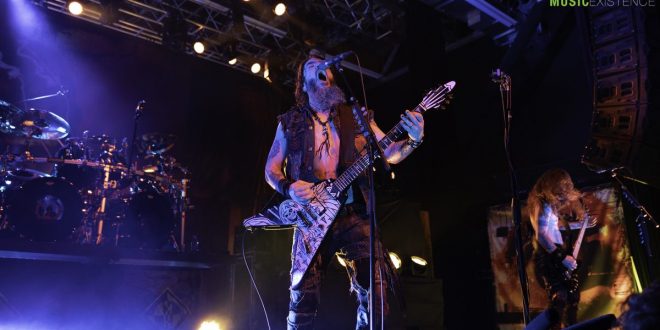 The mighty Machine Head had an epic conclusion to their Burn My Eyes 25th Anniversary Tour at the House of Blues in Anaheim, CA on February 22, 2020. Their 25 date tour across North America saw them play a 2 sets each night, first being fan favorites and hits while the second was their debut album Burn My Eyes with a few extras and surprises. With this being the last stop on the tour, Machine Head came out to a packed house and brought an energy so high that it would almost seem to be one of their first shows on the tour.

The mastermind himself, Robb Flynn, recruited Vogg Kiełyka of Decapitated to help with guitar duties and Matt Alston on drums for the first set on the tour. Bassist Jared MacEachern, with the band since 2013, played both sets while original members from the Burn My Eyes days, Chris Kontos and Logan Mader, came out and crushed the original album in the second set. They played for 3 plus hours every night on this tour and wasn’t letting up on this night, these dudes know how to rock!

The first set started out with Imperium and got the head cases, Machine Head fans, fired up and the energy didn’t let up at all throughout the night. Playing songs from almost all other 8 albums, the fans got the best of the best and didn’t stop the circle pit until the last note of each song was finished. From Vogg starting the high pitch of Take My Scars, off of The More Things Change… album, to Halo, off The Blackening album, the first set was nothing short of heavy and loud.

The second set had original members Chris Kontos and Logan Mader take over guitar and drum duties. The energy with the two of the original members was unreal and they played their heart out. Hearing these guys play the music they created 25 years ago that still has an impact on people today was a highlight that shouldn’t of been missed. The familiar sound of the drums in the beginning of Davidian made the place go crazy and the circle pit just got bigger and bigger as the night went on. After finishing the album the band played around and gave us some covers of Metallica, Exodus, White Zombie, and Slayer. The crowd was loving it and head banging until the music stopped. Machine Head put on one hell of a show and continue to be one of todays top metal bands in the world.

Machine Head has rerecorded their debut album Burn My Eyes with Logan, Chris, and Jared before this tour and it sounds amazing. Check out some of their songs from the rerecorded album on streaming services and their two latest singles Do Or Die (2019) and Circle The Drain (2020). Hopefully we’ll get a new album from these metal giants soon and another tour in the future, it will be one that cannot be missed.