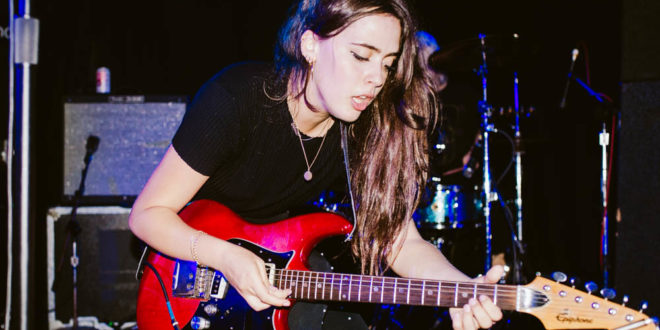 Yesterday, Madrid-born and bred quartet Hinds announced their glorious beast of a third album, The Prettiest Curse. On this new record, Hinds take a quantum leap forward as a band and shrug off any remaining lo-fi accusations, finally harnessing the full extent of their pop prowess and unleashing songs which sound bigger, bolder, and more complex than anything they have done before, while still remaining true to their girl-gang, garage rock roots.

“We have this incredible job, but it’s really transformed the way we live,” says Carlotta Cosials, explaining the album title. “We know we’re not going to stop, so we’ve decided to embrace it—to see this curse as something pretty.” Featuring songs performed in Hinds’ native tongue for the first time, The Prettiest Curse was produced by Jenn Decliveo and is positively bursting with life, finding Hinds at their very best yet.

Following “Riding Solo” which Hinds released at the end of 2019, “Good Bad Times” off of The Prettiest Curse is out today. Offering a fitting intro to the forthcoming record’s emotional landscape: melancholy yet joyful, weary yet defiantly wide-eyed, “Good Bad Times” is a long-distance serenade lit up in air harmonies and shimmery guitars, and is out now alongside an incredibly kitschy Jean Lafleur-directed video, featuring Hinds as the superheroes that they truly are.

Hinds on “Good Bad Times”: “you know that part in the movies when two people in a relationship are living complete opposite realities? when one thinks everything is great and the other one is about to drown?good bad times is the struggle of communication, time difference, distance. like the two sides of a coin. two sides close together that can’t be separated, even though they seem to be completely different.”

Hinds celebrated yesterday’s announcement by revealing a massive North American tour, starting in May. See below to find a show near you, and sign up HERE to get your pre-sale code now. Pre-sale with password begins today at 10 am locally, and general on-sale begins Friday at 10 am locally.