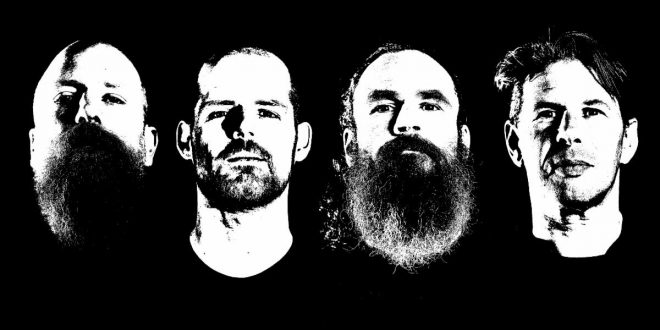 3
SHARES
FacebookTwitter
Kansas City, MO-based heavyweights Orphans Of Doom will release their second album, aptly titled II, on February 28 via The Company.
For a preview of the new album, check out the video for “Necromantic” exclusively via Metal Injection at https://metalinjection.net/video/orphans-of-doom-takes-their-song-necromantics-very-literally.
“It’s a story about a necromancer that loves his undead creations – maybe too much,” says bassist/vocalist Jeremy Isaacson. “The song is his perspective, justifying his undead love affair, advocating his behavior to others.”
Formed in the summer of 2016 by Isaacson, guitarist/keys Bryan Sedey and drummer Gregory Koelling, the trio pursued a singular goal of creating genre-defying heavy music. Melding influences of prog, heavy metal, and sludge, Orphans Of Doom set out to create music that first and foremost satisfied their own tastes, with the intent of drawing equally discerning minds into the fold. Their 2018 debut, Strange Worlds/Fierce Gods, offered a glimpse into Orphans Of Doom’s amalgam of riffs, melodies and rhythms and was met with high praise.
With time came progression, and when the band began the writing process for their sophomore album, it was clear that the new direction was faster, heavier and couldn’t be done with just three members. In 2019, Orphans Of Doom welcomed longtime producer and engineer Justin Mantooth (Sharp Weapons, Godmaker, Somnuri, Bummer, Hyborian) into the fold, offering opportunity for even more versatility and heaviness.
With II, Orphans Of Doom has continued to grow, offering a louder, faster and brighter slab of metal, leading them into the new decade with full force. Pre-orders for II are available at https://thecompanykc.bigcartel.com/product/orphansofdoom_ii.
“Our first album, ‘Strange Worlds/Fierce Gods,’ was a concept album where each song essentially became a chapter in a big, dense and atmospheric fantasy/sci fi theme,” says guitarist Bryan Sedey. “With ‘II,’ we abandoned the idea of an overall concept album to focus purely on writing heavier and faster songs that have their own unique voice. The same can be said for the packaging and album artwork. Ultimately, the goal with both was to combine traditionally heavy elements and present them untraditionally.”

II tracklisting:
1. New Ishtar
2. Necromantic
3. Swans
4. The Ornamentalist
5. Rust
6. The Last of Me (The Captain)
7. Viper Diaper
8. Fever Dream
To celebrate the release of II, Orphans Of Doom will play a hometown record release party at the Riot Room in Kansas City on February 28. Stay tuned for additional live dates.