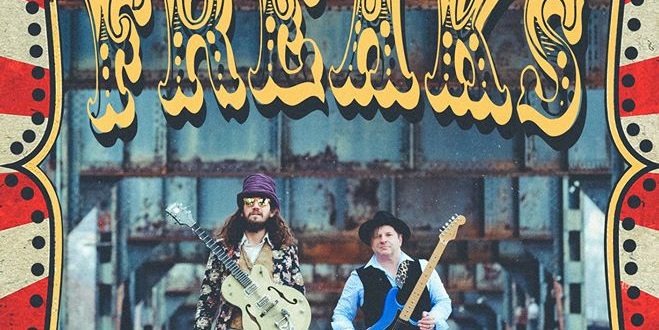 Hurry, hurry, hurry! Step right up, folks. See the greatest, the most colossal, the most stupendous, the most gigantic, the most sensational…THE GUITAR FREAKS!

On Saturday, March 21, 2020, Pittsburgh-based guitarists Brady Novotny (Top 5 iTunes chart) and “Guitar” Zack Wiesinger (Misaligned Mind) will debut their local answer to Joe Satriani’s G3 Tour. “The Guitar Freaks: A Sideshow Of Flying Fingers” will take place at Hard Rock Cafe in Station Square. Tickets are $15 in advance, $20 at the door. Advanced tickets are available at https://www.bradynovotny.com/the-guitar-freaks. Pre-purchased tickets will be uniquely designed, numbered and signed.

Brady Novotny explains, “Zack and myself are cousins. Although we both live in Pittsburgh, we never actually played together, nor had even been formerly introduced to each other. Jim Pitulski (formerly of Inside Out Records) and Julius Zoller were the ones that introduced us. We played a small show together this past summer, and I thought it would be a cool idea to put together a local G3 of Pittsburgh guitarists called, ‘Guitar Freaks.’ This first show is our debut performance, and it will be just the two of us. We will each play a set, and then, end with a Grand Finale of Zack and I playing together. Ultimately, we’d like to add a third guitarist, for a true ‘3-ring-circus.’ We will be playing this show in the tri-state area, possibly putting together a tour. We plan on growing this endeavor to make it an unforgettable experience and show!”

ABOUT BRADY NOVOTNY: Brady Novotny is a Pittsburgh, PA based guitarist that offers a unique fusion of musical styles in his compositions. With the blend of the nylon and electric guitar, Brady creates haunting melodies, but also captivates the listener with uniquely placed guitar virtuosity and dynamic rhythms. Thus Brady’s style is a fusion of Rock, Classical, and Flamenco. Brady has worked as a Pittsburgh session guitarist, Worship leader, and guitarist at several mega churches. He has also taught guitar at clinics and universities. His 2019 release with MTS Management Group/MTS Records is “Passions Collide” featuring the lead single, “Redemption’s Cry.” The song, featuring a vocal from Brady’s wife, Jennifer, charted on the Airplay Today national radio charts. The 2nd single, the title track, reached Top 5 on the iTunes sales charts, while staying on the Airplay charts for several months. Brady has also shared the stage with many world renowned guitarists including Paul Gilbert, Ron Bumblefoot Thal, and Uli Jon Roth. Brady’s latest single and video is “Ancient Romance.”

ABOUT ZACK WIESINGER: MISALIGNED MIND is a three piece rock ensemble based in Pittsburgh, PA. The band is fronted by guitar virtuoso Zack Wiesinger, who initially broke into prominence upon winning the Albert King Award at the 2006 International Blues Challenge in Memphis, TN. Shortly after, he toured throughout Europe and the USA as a solo opening act for legendary guitarist Steve Vai, on his String Theories tour, and was subsequently included on the accompanying DVD and Vinyl releases. He has performed at shows with Robert Randolph, Bruce Springsteen, B.B. King, Kenny Wayne Shepard, The Black Crowes, Ten Years After, Hubert Sumlin, and the Ike Reilly Assassination. On the “Legendary Rhythm and Blues” Cruise he appeared with Kim Wilson, the Fabulous Thunderbirds. Taj Mahal, Tommy Castro, Lil’ Ed and The Blues Imperials.

Assuming the guise of a true power trio, MISALIGNED MIND features Zack’s guitar wizardry with the stylized and inventive playing of Jarrod Tracey on bass & vocals and David Katonik’s backbone of rhythm on drums to form Misaligned Mind.

Previous Josef McManus (WHITE OWL RED) releases new single “I Walk the Line For You,”
Next A North-Sea Spanning Debut from ‘The Coo’