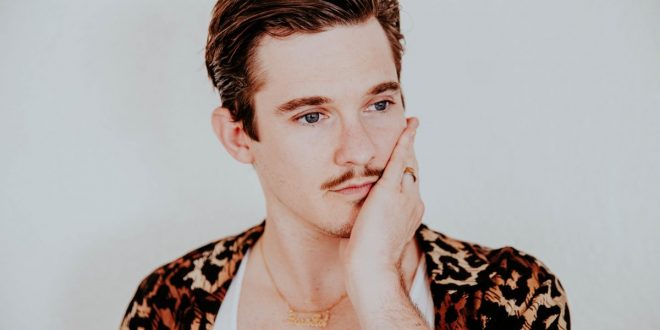 On his most recent album, Born Hot, Chris Farren paired polished, upbeat pop songs with lyrics illustrating feelings of self-examination and insecurity, all while developing a newfound sense of humor when it came to promoting himself. Today, as he prepares to kick off his headlining tour tonight in San Francisco, Farren shares a new song called “Phantom Friend” that expands his sonic palate even further, tapping into cleaner sounds prevalent among soft rock groups of the late 70s / early 80s.

With lyrics that define what it feels like to succumb to the growing apathy surrounding miscommunication between two people, “Phantom Friend” is another exciting look at what makes Farren so unique in today’s ever-evolving pop landscape.

“I’ve been listening to a lot of Destroyer and Belle & Sebastian, and I think that’s pretty clear in this one. Not like, ILLEGALLY clear but I can certainly hear the influence,” Chris explains. “I’m usually pretty burned out on writing after I release records, but this just kind of came out of me almost fully formed. My friend Jenny Owen Youngs came over at the eleventh hour and helped me fix some parts that weren’t 100%, and then Stevie from Adult Mom added some really great harmonies. And dang Jack Shirley mastered it!”

“Also, there was a cricket in my studio when I was recording it so I had to mix out a lot of chirping. I can’t find the cricket and it’s still in there. Help!”

Born Hot is available now via Polyvinyl Record Co. You can buy physical copies and merch here, or you can stream it wherever you want to stream it here.