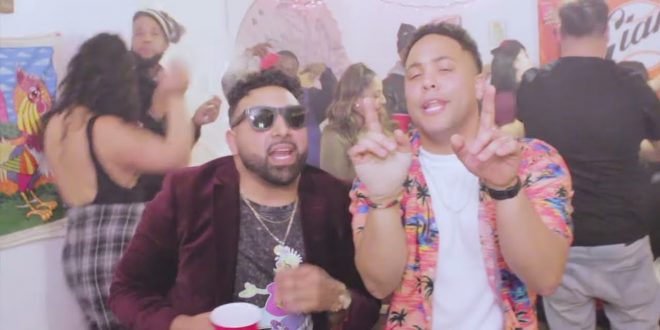 San Francisco’s RPxSB (an abbreviation of the stage names Roddy Picante and Stay-Bizzy) initially laid the blueprints for their project during their college days, creating an unreleased demo album titled The Cutty Online Mixtape. From there, the hip hop duo’s efforts would carry over into two additional splinter albums, TMP Vol 1 and Dos, which, like their initial project, they’d create on their MacBooks using GarageBand. After close to two years of back-and-forth email exchange of ideas, they decided to take it to the next level through a consistent series of hip-hop oriented skits, which have since become popular on YouTube and Instagram.

Currently, RPxSB’s much-anticipated debut album. AudioPorn, has been generating buzz since its late November release. The album, in pertinence with its title, was made with a nuanced, spacious production approach, and thematic synchronization between both rappers’ distinctive voices. From its first track, “Deep End-The Intro,” I managed to feel its sentiments, which, fittingly, are based around facing an extreme low. The subject of the song is disenchanted in reviewing the saturation of his lifestyle, uncertain whether he takes his life for granted, while at the same time, recognizing the extent of his circumstances. In spite of the bleak lyrical direction, the suave, organic instrumentation is a nice contrast. Those characteristics transition comfortably into “Pull Up,” the track to follow, which effectively captures the feeling of driving while both speed and emotions are on high – delirium, bliss, anxiety, and paranoia, all rolled into one experience. Once again, the instrumentation takes a smooth stance to further punctuate that contrast. It’s a bit calmer this time, but the colorful synth strikes make a decent contribution to the liveliness as well as the pacing of the track. Interestingly, the third track, “Oct25,” is an indirect expansion of the first, this time centering on, through a confessional delivery, the decline of the American dream. It seems that the extent of this saturation is exhibited toward the song’s halfway point, which features a phone call where very few words are awkwardly exchanged, lacking in emotion.

However, considering the brutally honest tone that has persisted up to this point, there’s a shift toward something more laid-back beginning with “Sam Ol,” one of the album’s four shorter tracks with a dual role as a song and interlude. At this point, the duo conveys a level of contentment in moving forward from various hardships, unconcerned with whether or not they’d make it in a big way. They then carry that attitude over into “Blocked,” which displays a newfound awareness of the other’s conversation tactics, and even a stance of support and grace toward them, rather than the expected outright anger. From that point onward, there’s a clear growth factor not only in the thematic outlook, but the way the instrumentation complements it. Beginning with “Vemars,” the latter half’s songs are more subdued and almost tranquil, like a smooth-sailing cruise – a far cry from the haze-filled, nauseating anxieties expressed on the album’s first side. The closing track, “Mr. White – The Outro,” puts these sentiments in perspective, with only how far they’ve come continuing to shape their path as human beings.

Overall, AudioPorn marks a solid transition from RPxSB’s growing success on social media. It’s a very human journey that develops from the album’s emotionally rocky start, with both rappers reiterating their awareness of their circumstances, as well as ultimately recognizing the efficacy of combined faith and humility. With the presentation of this album, I’m definitely looking forward to what the two have in store for 2020.

I come from a family who is passionate about all things music. I learned to sing at an early age, and by 13, had my very own Fender Strat guitar. I tried my hardest at learning all that I could. Because I was born with cerebral palsy, I had to teach myself an adaptive playing style. I learned to write and record my own music, despite these difficulties. In college, I started making great use of my writing abilities by reviewing music, as well as copy editing. I guess it's best to stick with what you know, while welcoming a fair challenge at the same time.
Previous Gallery: Heilung at The Regency Ballroom in San Francisco, CA (01.11.20)
Next Featured Talent: Da Mindsetta