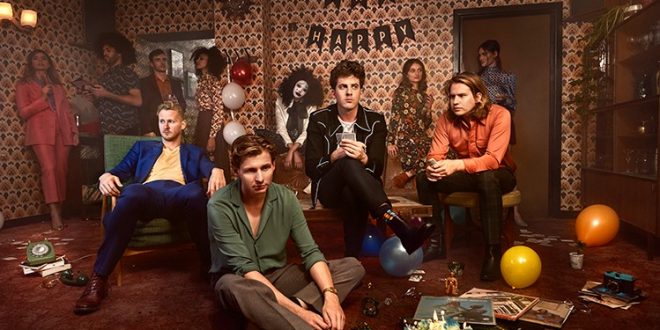 Today, Circa Waves released new track and self shot video for “Move to San Francisco” ahead of the release of the Happy side of their fourth studio album Sad Happy which will be available on all streaming platforms on January 10, 2020. FLOOD Magazine (who premiered the video) says, “It’s a song about weighing the idyllic versus reality, though the Super 8 film it arrives with is purely a daydream.”

Watch the video for “Move to San Francisco,” shot and directed by the band now:

Inspired by how quickly pop and hip-hop move in today’s streaming age, the Friday release of the Happy side of Circa Waves’ new album distills the band’s sound into its purest form while pushing it forward into a more expansive, and mature space. It’s a moving, energizing, and timelessly melodic record and incisive in its portrait of modern life. The heart and soul of the record lies in its hymns of fading relationships, self-deprecation, and anxieties of modern day.

Discussing new track “Move to San Francisco,” Kieran Shudall says: “Inspired by the Beatles favourite instrument the Mellotron, ‘San Francisco’ was written in a quick burst. It’s about escapism, pessimism, and Bruce Springsteen. In the spirit of DIY, we decided to film the video ourselves and let Joe edit the shit out of it. We walked to the highest point in San Fran, went to the lowest dive bars, and even filmed the Golden Gate Bridge. What the video lacks in camera prowess, it makes up for in idiotic charm.”

Lead single “Jacqueline,” which was released at the end of last year, is an infectious, Soweto-flavored groove that explores the theme of single motherhood in modern Britain. Fans will find songs like the anthemic “Move to San Francisco” and “Be Your Drug” just the kind of guitar-led sunshine pop rock they fell in love with five years ago. Happy was written and produced in full by Kieran Shudall and mixed by Grammy winners Dan Grech-Marguerat and Matt Wiggins.