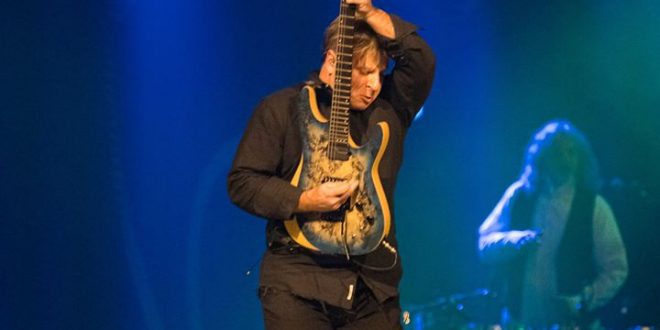 The top 3 iTunes charting guitarist from Pittsburgh has released the video for “Ancient Romance.” It was filmed at Otttis Castle in St. Augustine, Florida.

“One of the most appealing guitar records of the new year….he plays like a living legend” – Indie Band Guru

“The jaw-dropping flamenco acoustic guitar, gives off an iridescent aura. On the other hand, the fiery electric riffs and shreds are nothing short of euphoric.” – Jamsphere Magazine

Since the February 2019 release of his debut album, Passions Collide, Pittsburgh-based guitar virtuoso Brady Novotny has been on a ride of epic proportions. After leaving his beloved instrument behind for the better part of a decade, Novotny returned to his first love, like the Prodigal Son, returning to his loving and forgiving father. The first single release, “Redemption’s Cry” received national and international airplay and charting, receiving press on such highly touted and diverse sites as JesusFreakHideout and Metal Devastation Radio. That single, combined with the subsequent title track release, received in excess of 150,000 Spotify streams and 35,000 youtube views. The latter also reached the Top 3 on the iTunes rock songs chart in Canada, earning Novotny status as one of the most exciting new artists of 2019.

Now, Brady Novotny’s journey has come full circle with the release of his brand new music video, “Ancient Romance.” The epic production, directed and produced by Novotny and Joshua Thomas, was filmed over three days at Otttis Castle in St. Augustine, Florida. Because they hand-pick their projects, it was one of the only music videos ever allowed to shoot at the location.

“This instrumental piece was written to transport the listener to another time period,” explains Brady. “The song combines elements of melodic rock guitar with a Flamenco influenced breakdown. ‘Ancient Romance’ has a unique, Renaissance vibe, using atmospheric guitar counter melodies with a vocal section by (my wife) Jenn Novotny. The story behind the video is loosely based off the scripture Luke 15:11, The Prodigal Son. My hope is that the viewer will not only be moved by the music, but also by the ancient message of God’s love.”

Brady gives the story behind the song at https://www.youtube.com/watch?v=vVRtLaDGR6w

ABOUT BRADY NOVOTNY: Pittsburgh native Brady Novotny is no stranger to the stage, or the world of music performance. In fact, as a nationally-touring musician, the guitar virtuoso has been heard by thousands of people. Each Christmas season, Novotny performs to more than 20,000 attendees as a member of the Victory mega-church worship team. He was featured in the April 2019 issue of Guitar Player Magazine.