Home / Article / Richard Lynch Pays Homage To His Daddy’s Gibson Guitar On New Single “Back In 1953.” 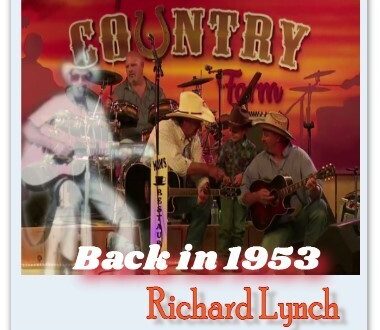 The chart-topping country music artist and member of the Ohio Country Music Hall of Fame will release his latest single on Saturday, December 21st.

1957 was a momentous year in country music. The radio was filled with huge hits by the stars of the day: Elvis Presley, Johnny Cash, Ferlin Husky and Jim Reeves. Future stars like Patty Loveless, Vince Gill and Pam Tillis were all born in 1957. Meanwhile, in a Kalamazoo, Michigan factory, one of the first Gibson guitars featuring a cutaway and built-in pickup was being manufactured. That guitar would become a prized possession of Woody Lynch, who would eventually pass it along to his son, a 19-year-old burgeoning country artist, Richard Lynch.

Fast forward to 2019….Richard Lynch is carrying on the family tradition of writing and recording “real” country music. On Saturday, December 21st, Lynch will release an homage to that old Gibson guitar and his father, in his latest single, “Back In 1953.” The song, written by Lynch, Tim Bennington and Robert Lynch, had its world premiere on Devon O’Day’s WSM Radio show in Nashville on December 18th. The track is on Richard’s latest album release, “Think I’ll Carry It On.”

Lynch says, “It’s my hope that I can pass it along to the next generation, and the generation after that..this love for real country music.”

ABOUT RICHARD LYNCH: Richard Lynch is a Waynesville, Ohio-based country music artist, who has compiled a long list of country hits and chart toppers in the world of traditional country music. His single, “A Better Place” topped the New Music Weekly AM/FM country chart, the IndieWorld Country Record Report, and spent an incredible 32 weeks atop the Roots Music Report True Country chart. His next 4 singles also topped the country airplay charts, including a duet with Grammy Award Winner, Rhonda Vincent. Richard’s single, “Country Music Isn’t Country Anymore” went Top 25 on the iTunes Canada sales chart. His single, “Pray on the Radio” received Christian radio airplay and charting, also reaching the US iTunes Single Sales chart. Lynch has appeared on WSM Radio Nashville, RFD TV, Fox TV, and countless other media outlets.Richard is a member of the Ohio Country Music Hall of Fame, The Independent Country Music Hall of Fame, and he is a Billboard Magazine Emerging Artist. He is also the host of “Traditionally Lynch,” airing on TV and radio, and he’s the founder of the Love Tattoo Foundation for veterans. His previous single, a duet with Leona Williams, was #1 on the Roots Music Report charts for 7 weeks running.