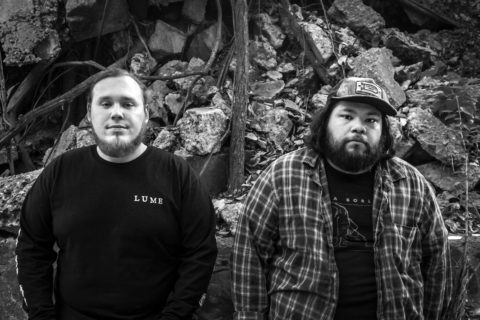 171
SHARES
FacebookTwitter
Since their formation in 2017, Wooden Earth has released 2018’s Waves Of Smoke EP as well as their brand new single “Fangs” that’s gonna be a part of their debut album in 2020. The Dallas-based core duo of Griffin Thomas (drummer/vocalist) and Devin Moreno (guitarist) have been through three bassists and are currently touring as a two-piece. Next year is gonna be huge for them since they’ll be touring but also releasing a comic book they’ve written about their band.
First of all, congrats on your new single “Fangs”. Can you tell me the story behind the song and what inspired you to write it?
The song is about conquering your reality with a bloodthirst to survive. Pushing forward and building something great. Being optimistic when the world is at its darkest.
The song will be featured on your debut album. What was your favorite and what was the hardest part of making this album?
That very first listen to your final product has to be my favorite part of the process. It’s insane to hear your ideas come to life. Hardest part is always the writer’s block, but sometimes you just have to step away for a moment then dive back in with a fresh ear.
Did you already come up with the name of the new album?
Not yet, kicking around some ideas.
How did your music evolve since the release of your last year’s EP Waves Of Smoke? What differences can we expect to see on the new record?
We’re much more unforgiving than we were on our EP. Heavier and more precise both vocally and tonally.
What bands influence your style the most?
The Chariot, Mastodon, Red Fang, Truck Fighters
Do you find it more challenging that there are only two of you in the band or do you think it’s easier working with fewer people and why?
We’ve been very lucky to play with such good musicians, but playing as a two-piece has been really cool. We cover just as much ground, if not more. I think the most challenging part of being a two-piece is driving and load-in.
You’ve also written a comic book which I think is a very creative way to present your band. How did you come up with that idea?
A few years back our guitar player had broken his ankle and was laid up in bed for quite some time. One day he sent me a two-paragraph story he was working on and right then we knew that was going to be our band.
You’re preparing for a tour in January. Tell me what songs do you enjoy performing live the most?
Fangs, Waves of Smoke, 21st Century Schizoid Man
And lastly, where do you see yourself and the band in 10 years?
We want to be a world-renowned band. We want to show everyone what we do.
Listen to the new single “Fangs” down below: