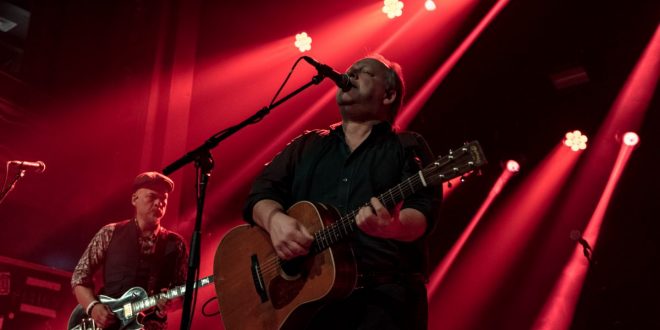 In 1986, the Pixies broke out onto the scene in Boston, Massachusetts with an eclectic style fusing influences from punk, indie noise rock, and surf rock all together as one, with this unique style of music, spawning generations of a wide fan base.

On Monday, December 9th generations of fans from all walks flocked to the recently renovated historical Webster Hall in New York City for a sold out night with the Pixies. With the weather not playing in anyones favor that evening, as rain showers would continuously plague the entire day and the show being sold out, I felt it would be best to get there just slightly after doors opened in hopes to not have to stand in any lengthly line in the rain, luckily the rain had just let up as I made my way up from the subway to Webster Hall, as well missing any type of line. Once inside fans took advantage of the newly designed venue, grabbing drinks from the bar and lounging around on the cushy sofa like booths downstairs, and of coarse grabbing some merch prior to show time.

The Pixies are playing only six intimate shows on this North American run with direct support from Kristin Hersh. These six shows are more then just intimate, each show on the run is different from the other where the Pixies perform a two hour mind blowing set of creative improv style. The setlist for each show on the run is made up as the Pixies go along from song to song. There’s no real discussion on stage, just a few short words amongst each other and then straight to it. Fans were mesmerized by this rawness showcased by the Pixies, so mesmerized that for two hours I witnessed almost all 14,000 fans in attendance actually watching the entire show and not playing with their phones.

Opening the night with “Cactus,” the Pixies played a 37 song set spanning through the bands entire catalog of albums, with the first three coming from 1988’s ‘Surfer Rosa’ other timeless classics like “The Holiday Song” and “Nimrod’s Son” off their debut album ‘Come On Pilgrim’ made the cut that night along with such others as “Here Comes Your Man,” “Ana,” and “Debaser,” and rounding everything off with the set closer “Planet of Sound.” The Pixies had something for everyone that evening, not one person could have walked out from that show in awe with the performance. Without stepping off stage for a single intermission brake through a two hour performance, an improv set that sounded as tight as a well thought out and rehearsed set, the Pixies truly showed fans just how much of a well oiled machine they truly are as the Pixies continue to stand the test of time while cementing their legacy.

NewYork Based Photographer. Music Enthusiast with a background in Graphic Design. Whether I'm shooting a live event or just out wondering the streets its about capturing the moment.
Previous Single Review: Dirty Snowman Society – “Mad Bull”
Next Brooke Annibale Announces Debut European Tour for March/April 2020