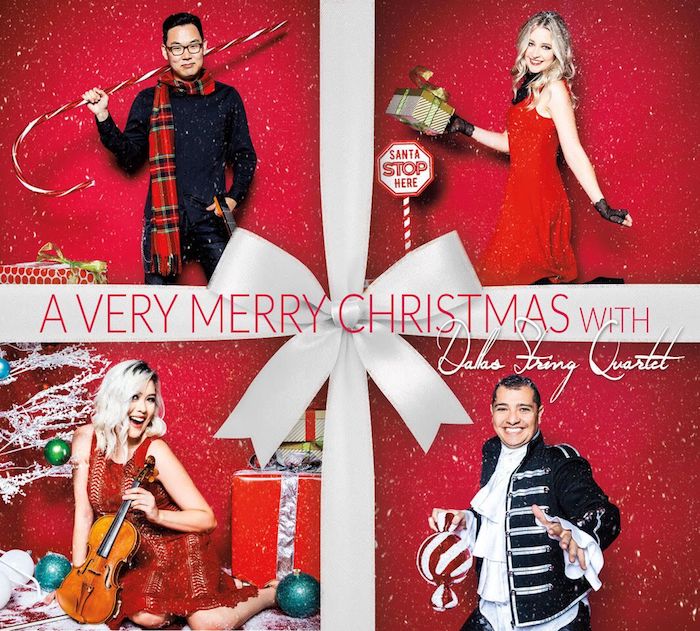 Christmas isn’t just a time for shopping and vivid lights outside homes. It’s a time, as well, when musical acts of various styles feel the festive spirit as well and release songs and albums with a Yuletide theme. Dallas String Quartet, however, haven’t recorded your typical holiday release. The synthesis of pop and contemporary classical finds particularly fertile ground with this ten song set of Christmas standards, but that shouldn’t come as a surprise for anyone familiar with the Dallas String Quartet’s past. Daring within a traditional framework defines their musical journey since first forming in 2007. They made a decision to break with the expected for a string quartet, electrified their instruments, and began reworking modern songs for inclusion in live performance. This proclivity has continued through the quartet’s subsequent recordings and they adopt the same approach for the ten song collection A Very Merry Christmas with Dallas String Quartet.

The album opener “O Holy Night” begins as a dyed in the wool classical piece carried by violist Ion Zanca and violinists Eleanor Dunbar and Melissa Priller. They take a purist approach to interpreting the track during the early going before the full band enters the musical frame. The rhythm section of drummer Efren Guzman and bassist Young Heo provide the necessary ballast for Dallas String Quarter to extemporize from the source material. Dunbar and Priller deliver a dazzling showcase of virtuosic violin playing and the pace picks up as the band whips the performance up into a memorable crescendo. There is a smattering of guitar present in the mix as well, courtesy of Anthony Plant, and the six string brings additional color to the piece.

The single “My Favorite Things” opens with much of the same emphasis on a traditional approach we heard with the opener. Dallas String Quartet are much faster here, however, mixing things up and incorporate piano into the song’s musical makeup with memorable results. It isn’t quite as jaunty as typical covers of this standard until near the song’s midway point and Plant’s recurring guitar flourishes, never omnipresent, once again fleshes the song out with color. It’s an interesting track, as well, thanks to how it reveals the musician’s understanding of dynamics – there are contrasting moments of light and shadow, strength and delicacy, woven into the arrangement to help make this one of the best cuts included on the release. It’s little wonder why they chose it as a single.

There’s almost a smoky jazz club quality to how the piano opens “Have Yourself a Merry Little Christmas”, but the string instruments soon place listeners back in familiar territory and invoke the song’s timeless melody with immense tastefulness. There’s only a light presence of Guzman’s percussion in the song, but it is nonetheless effective. The finale “It’s Beginning to Look a Lot Like Christmas” closes the album release with an exquisite musical dialogue between the string instruments with accompanying percussion. Plant contributes melodic lead guitar lines that add another instrumental voice to the tapestry. It’s a fine and fitting conclusion to one of the best Yuletide themed albums in recent memory.

Previous Nina Nesbitt gets you in the Christmas spirit with new version of “Last December”
Next Live Review + Gallery: Static X, Dope, Wednesday 13 at Sony Hall in New York, NY (11.24.19)