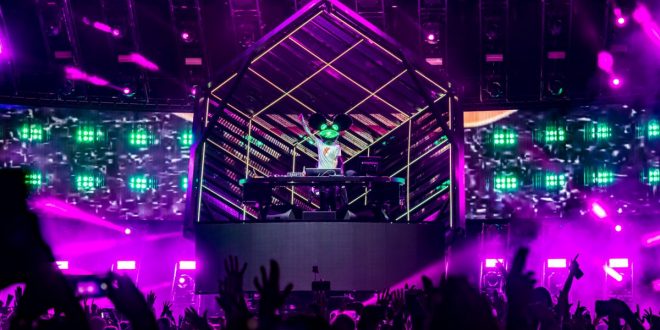 This past Friday, November 29, electronic music producer and performer deadmau5 made available via his label mau5trap another new song from his cubev3 live set with “Fall.”

Like “Coasted” — which made its online debut on Rolling Stone, accompanied by an exclusive visual from mau5trap content director Leah Sems – and “Satrn” “Fall” is new material featured as part of his new cubev3 show complimenting the most complex production he has ever presented. Each night of the tour, these songs sit within a unique set of his extensive catalogue and fan favorites from “Monophobia,” “Ghosts n Stuff” and “Strobe” to “Raise Your Weapon” and “Drama Free” with vocals by LIGHTS.

The original cube debuted at Coachella April 2010, catapulting deadmau5 to become one of the most in-demand live acts in the world, with its follow-up Cube 2.1 arriving in 2017 at the launch of his “lots of shows in a row tour.” cubev3 – changing positions from 90 degrees to 45 degrees and rotating 360 degrees—comes to life with mind bending content accompanied by a custom selection of music performed live by deadmau5.