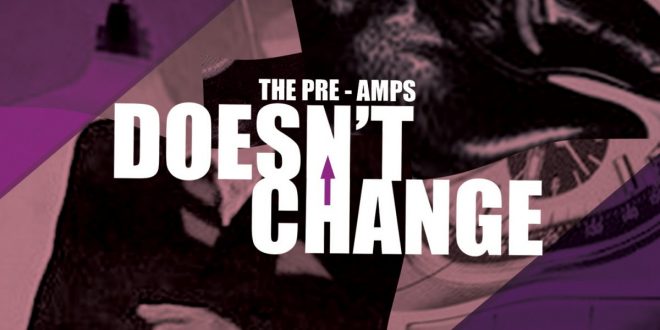 395
SHARES
FacebookTwitter
‘Doesn’t Change’ is the debut single by The Pre-Amps and released by the Label Recordings. The dreamy psychedelic pop track has been described by vocalist Kelvin as a modern interpretation of ‘Substitute’ by The Who and whilst The Pre-Amps wouldn’t look out of place on an episode of Small Faces era Top Of The Pops thanks to their pristine aesthetic, they are not just another pastiche band.
Newcastle’s The Pre-Amps formed in 2017 when they met at college and bonded over their love of all things mod and melodic. After playing over 100 shows across the UK as a covers band, it was a natural progression for the boys to take their influences and put their collective talents into creating something of their own.

“We feel that the track is a more up-to-date take on a classic, well loved style of pop/rock song writing that has sadly been somewhat forgotten by our generation in recent years, but we feel that there is a growing appetite for this style of guitar/harmony music in the modern world.” the band explain.  “Our influences stem from around the mid-1960s; artists such as The Who, Small Faces, The Kinks, The Rolling Stones, The Moody Blues and The Monkees, combined with some more recent inspiration from the likes of The Jam, Status Quo, The Sweet and Slade in the 1970s, up to bands like The La’s, Oasis and Beady Eye in the 1980s, 1990s and 2000s”.