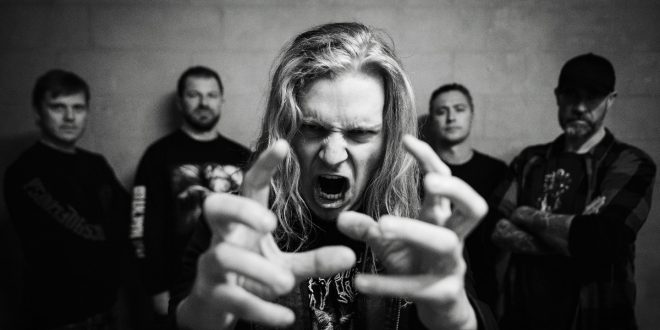 On Friday, Denmark based death metal band Blood Eagle will release their final To Ride In Blood and Bathe in Greed EP via Nuclear Blast. On Monday November 11th, the band released to fans a lyric video for their song “Eyes Sewn Shut” off the EP. Watch the video, now:

The band comments, “The new album offers a vast array of influences, from punk, grind to death metal. One of the last songs we did for the album is ‘Eyes Sewn Shut’. This song came out more experimental, even with some influences from Slayer. The lyrics deal with corruption and touch upon the dark facets of capitalism. Nonetheless definitely a song that can best be described as commanding skull crushing death metal energy.”

The band is comprised of former members of Volbeat, Mnemic, Hatesphere, Illdisposed, and Raunchy. Officially surfaced in 2013, good friendship and love for old school death metal have made Blood Eagle an unstoppable force.

The album was produced, engineered, mixed and mastered by Tue Madsen at Antfarm Studios. All artwork was created by Rune Stigart. The final EP for To Ride In Blood & Bathe In Greed will be released on November 22nd.

The band comments, “We are honored to have signed with one of the world’s leading record labels, Nuclear Blast Records! The excitement level of Blood Eagle finally finding the right home to release new material, is higher for us than we can ever express. There are people who want to hear this band, as was evident in the reaction to our performances on multiple European festivals in the last couple of years. We are excited and grateful to be working with the guys at Nuclear Blast, as they strongly will help facilitate and take the Eagle to the next level.

TO RIDE IN BLOOD & BATHE IN GREED track listing:
Part I

Make sure to order your digital copy of TO RIDE IN BLOOD & BATHE IN GREED here: bloodeagle.lnk.to/ToRideInBlood

NewYork Based Photographer. Music Enthusiast with a background in Graphic Design. Whether I'm shooting a live event or just out wondering the streets its about capturing the moment.
Previous We Came As Romans announce “To Plant a Seed” 10th anniversary tour
Next Randy Blythe to perform on entire tour with industrial supergroup PIGFACE