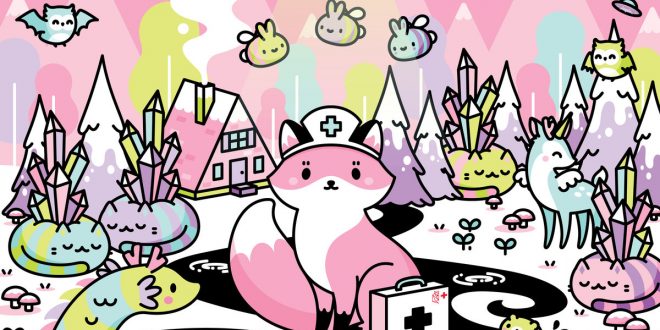 Portland doom-metal duo Fox Medicine craft a very unique and eclectic sound. Combining the harsh, distorted riffs of sludge metal with the bubblegum-sweet vocals that BABYMETAL have made famous creates combination. Their newest album, Procédures Mystiques creates the strange and terrific soundtrack to a pastel apocalypse.

The album opens with the bombastic “Comfort Pony.” The cut sounds like a b-side to a Melvins album, with heavy distortion on the guitar, along with thick and gritty drums. This combo creates a wall of sound that punches listeners’ ears like they’re in a mosh pit. The sound is phenomenal, and the production by Toshi Kasai (whose credits include producing stuff for Melvins and Tool) is just plain fantastic. The hard hitting sound and playful experimentation the band’s doing on Procédures Mystiques continues throughout the entire album.

Another highlight from the album is the top-notch “Strawberry Tree.” The track blows through its four and a half minute runtime at blazing speeds. Guitarist/vocalist Neezy Dynamite’s child-like vocal delivery provides an unnerving juxtaposition with the apocalyptic sound the song delivers. At some parts, Dynamite’s delivery has remnants of Surfer Rosa era Pixies. “Strawberry Tree” is easily the most well constructed song on the album as far as execution goes.

The next three tracks on the album follow the same formula the previous songs do. The sludgy guitars and thumping drums can only carry the weight of the subpar lyricism and childish vocal delivery for so long. “Orion’s Pointy Belt” is a solid track, the slight use of synth makes the track refreshing compared to the slog the middle of the album provides.

Although Procédures Mystiques has its flaws, Fox Medicine delivers on a solid sludge metal record. Cuts like “Strawberry Tree” and “Orion’s Pointy Belt” are fantastic pieces of grungy, sludgy rock music. The record sounds like a ‘90s era Melvins album that was never released. It’s an album of the year candidate based solely on the unique persona the band has created for themselves on this record.