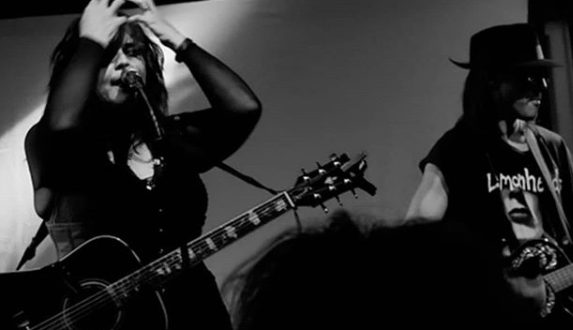 A vivacious acoustic guitar springs the first few chords of Caroline Blind’s “God Damn the Sun” to life with an opulent melodicism that will become all the more powerful as we press on in this excellent cover of the Swans song of the same name. Blind begins to sing, and though she’s as confident as ever in her emission of every word, there is a hesitance in her voice that’s both endearing and sweet. She didn’t pen this track, but there’s an intimacy to the lead vocal she gives up here that is transcendent, emotional and as obvious to the casual listener as it is the devoted audiophile. Caroline Blind’s “God Damn the Sun” is an inspired cover that comes at us with everything the talented singer has got in her war chest right out of the gate, and although it’s hardly the only slice of heaven she’s recorded in her career to date, it could be described as being one of the most vulnerable and exposed performances that she has committed to master tape thus far.

One of my favorite things about this single is its production quality, which is clear and crisp enough for us to hear every intricate detail in the tonality whilst remaining unvarnished and, most important of all, untainted by pomp and plasticity. The mix, handled by Gordon Young (who also mastered the recording), is very even but layered as to focus all of our attention toward the harmonies and the way that Blind weaves her words into the carefully structured string melody. The guitars never sound like a separate entity here; instead, it’s as though they’re an extension of the words that our singer is crooning to us in her own unique drawl.

The seamlessness between the different components is spectacular, but I don’t believe that it was created through this artful mix exclusively. Blind has a way of connecting with the instrumentation in this song that makes me very excited to see her live at some point, because if even a fraction of the presence she’s got here were to transfer over to the stage well, hers would be an unmissable show to put it mildly.

At a modest 3:45 in total running time, Caroline Blind’s “God Damn the Sun” isn’t the longest single you’ll encounter this month, but it’s definitely one of the more urbane covers that you’ll hear before the year expires. It’s impossible to fully replicate the charm of the original version of Swans’ 1989 treasure, but I think it’s a credible statement to say that Blind has come pretty close in her take on its memorable melody. This track has a Mazzy Star feel flanked with a very contemporary stylization of its arrangement, and though I doubt it will be the last release from this artist to make a big splash with the American indie underground, my gut tells me that it’s going to win her a lot more favor with critics and audiences around the world this autumn and beyond.