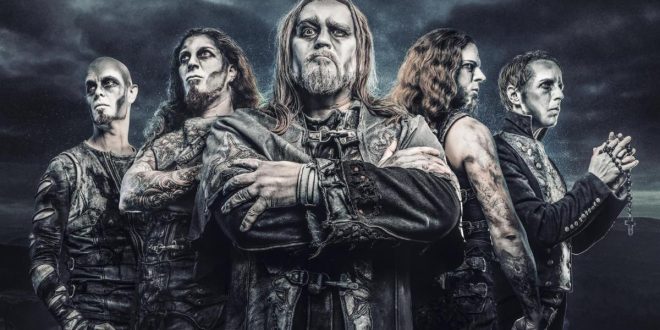 3
SHARES
FacebookTwitter
2019 marks the 15th anniversary of Germany’s most successful heavy metal band, POWERWOLF. The ultimate high priests of heavy metal will celebrate their triumphant story and band anniversary in glorious style. As a gift to their loyal fanbase all over the globe, POWERWOLF have just unleashed a blistering, brand new version of their timeless classic, the hit single “Kiss of the Cobra King”. Taken from the band’s groundbreaking debut album, ‘Return in Bloodred’, POWERWOLF re-wrote the track to give it an absolutely new and refreshed vibe like you have never heard the song before.
“To celebrate the packs 15th birthday, we decided to realize an idea that had been around for many years – it felt like now was the right time for it to be realized. As a birthday present to ourselves and all the legions of PW-maniacs out there, we have re-written the ‘Return in bloodred’-classic “Kiss Of The Cobra Kin” Matthew Greywolf comments. “This song has been one of our faves ever since and it was a fun experience to transform this song into how it would sound if it were a song written by Powerwolf in 2019.
The brand new version of “Kiss of the Cobra King” is now available as CD Single, a 7” Single Picture Vinyl (only available on EMP) as well as in Digital Formats. Celebrate 15 years with POWERWOLF, and purchase the track right HERE

NewYork Based Photographer. Music Enthusiast with a background in Graphic Design. Whether I'm shooting a live event or just out wondering the streets its about capturing the moment.
Previous The Essence Of Epica To Be Released On December 9, 2019
Next August Burns Red Add Knocked Loose To Holiday Show