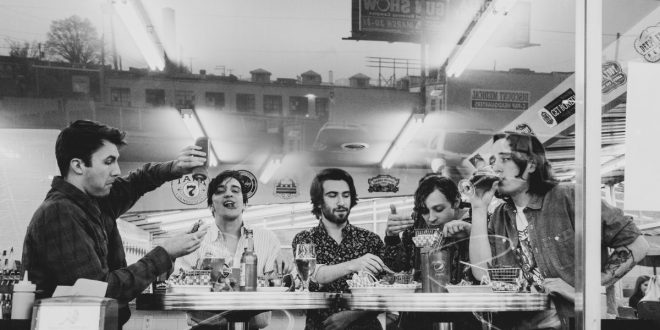 Flight Club is a five piece rock band from Richmond, VA who draw their influence from their southern roots. The band take the gritty blues and classic rock tones they were raised on and adds a dose of punk rock intensity, blending them together to find soulful, raw, and passionate sound.

We got the chance to ask Flight Club some questions to the band to get know more about them.

How did you come together as a band? Is it still all original members?

Sam started the band when he was in high school. Met Drew and Charlie in college who eventually joined the band. Alex is Charlie’s cousin who joined after filling in for a couple of shows. We met Harry while we were all working on Warped Tour and when word got out we needed a drummer he came to the rescue.

What is one show that you’ve played that sticks out to you?

Our most recent headlining hometown show in Richmond at Canal Club. We hadn’t really been playing shows that year while we recorded new music and it was our first one back. We had a bunch of familiar and unfamiliar faces in the audience. People were singing, dancing, and smiling. Couldn’t stop smiling the entire set.

What does it take for a band to stand out in a music environment like Richmond?

It’s just as important to define your sound as something unique as it is to stay involved in attending shows of other local bands/artists. If you want your band to progress in the live scene, you need to support as many others that you hope to support you.

ENERGY. We take pride in our explosive live performance. There are very few moments where we aren’t giving everything we’ve got to the songs, the crowd, and each other. We have a motto, “be the crowd you want to see”.

Do you typically write songs together or does one of you write them?

We try to do it all. We’ll bring in song ideas individually, group-write, free jam until we hit something that clicks, whatever. Always trying to mix it up to keep the fresh ideas coming!

What should people expect from you in 2020?

Sam – Simple Plan, Still Not Getting Any…

Alex – Panic! At the disco

Harry – A Day to Remember

How often do you have to tell people it’s FLIGHT club and not FIGHT club?