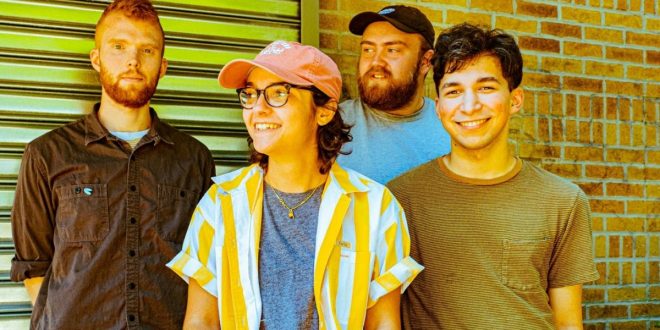 Macseal are thrilled to share their new single “Lucky For Some” today. The song is paired with a new music video featuring footage from the band’s past year of adventures on the road. The Long Island outfit’s full-length debut, Super Enthusiast, is out November 8th on 6131 Records. Songs on the record have already been glowingly described as “an enjoyable breezy dose of emo-ish indie rock” by Brooklyn Vegan, and imbued with “a whimsical type of charm fed by glimmering guitar tone” according to The Alternative.

Working with engineer Justin Pizzoferrato, the Long Island outfit explore a range of joyful guitar pop and multi-part harmonies tempered with math rock riffs and J Mascis inspired solos. All expertly paired with a sometimes morose and self-deprecating lyricism sure to win over more than a few David Bazan fans. Following Super Enthusiast’s release, Macseal hit the road in November for a string of dates dubbed the “Super Enthusiast Tour”, and have further shows planned in 2020 with Chris Farren. All upcoming tour dates are below.

Macseal is one of the most exciting bands to emerge from the vibrant, historically thriving Long Island, New York music scene in recent memory. Their unique ability to craft hook-laden earworms that also feature relatable lyrical narratives is uncanny and is impressively matched by their electrifying live shows.

Following the release of three EPs from 2015-2018, the band entered the studio with Justin Pizzoferrato in March 2019 to record their first proper full length. The resulting album, Super Enthusiast, is a not just the culmination of their honed songwriting over the previous few years, but also marks a decidedly new chapter for Macseal sonically. While their trademark sound remains present, a new maturity exudes throughout, marked by some of the most infectious music the band has made to date.