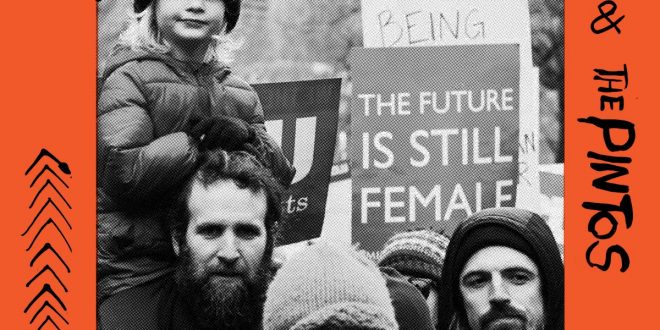 Chadwick Stokes has announced his self-titled record with his band The Pintos that tackles personal and political territory in ways that feel intimate and urgent. Set for release November 15, 2019, Chadwick Stokes and The Pintos brings the complications of history into conversation with the turbulent yet—from Stokes’ perspective—hopeful present. “We’re living in a crazy time, a very upsetting time,” says Stokes. “If we’re not protesting, there’s a problem.” The album is available for pre-order now – PRESS HERE to purchase. Having tested many of these songs on the road over the years of touring, Chadwick Stokes (frontman of popular indie rock band Dispatch) has created an almost timeless quality to these refined and reimagined studio versions.

The writing in Chadwick Stokes and The Pintos notes intense struggles—personal, ethical, political, or cultural—that have always galvanized Stokes as a listener and artist. Along with the announcement, Stokes has released the first two tracks “Joan of Arc” (PRESSHERE to listen) and “Chaska” (PRESS HERE to listen). Written about the famed teenager from her first vision to her execution for wearing men’s clothing, “Joan of Arc” is a timely feminist anthem that sears with hope and empowerment. “Chaska” is a story of mistaken identity wrapped up in the largest mass execution on United States’ soil.

Other tracks on the album include “What’s It Going To Take,” “Love and War,” and “Blanket on the Moon” which discuss relevant issues such as the gun violence epidemic, PTSD, and America’s current immigration policies.  Other tracks like “Sand From San Francisco,” “Hit the Bell With Your Elbow,” and “Lost and Found” discuss disconnected relationships and the power of choice.

Chadwick Stokes and The Pintos is Stokes’ third solo record and his first as a producer in Brighton, Massachusetts. “I always like how records have a little bit of a taste of where you recorded them,” says Stokes. “I don’t think I’ve ever done a full solo record here in Boston, so that’s always nice to have the home vibe, to have your friends coming in and sing on big back up group singing parts.” Stokes enlisted the artistic muscle of friends and family on this record. Willy Urmston (Chadwick’s younger brother) plays banjo and sings backup vocals; Jon Reilly, Stokes’ long-time touring and recording percussionist, also contributes backup vocals. Tommy Ng on bass and vocals rounds out the ensemble, an addition that was narrowly missed. Ng was a dedicated volunteer with Calling All Crows, the social activist organization founded by Stokes and his wife, Sybil to that partners musicians with fans to create change through hands-on service and activism on women’s rights.

Previous COUNTERFEIT. share empowering new music video for “It Gets Better”
Next Macseal share new single “Lucky For Some” + tour with Chris Farren