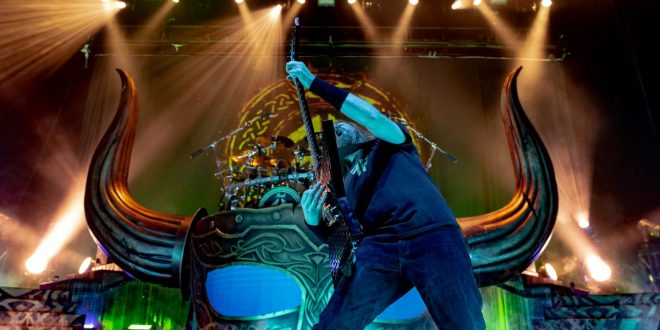 On Saturday October 12th, the Viking group of Amon Amarth landed their Berserker Tour on the Island of Manhattan to invade Hammerstein Ballroom along with their Swedish counterparts Grand Magus, At The Gates and Arch Enemy. The Swedish invasion took the island of Manhattan by storm battling on the grounds of Hammerstein Ballroom in epic proportions for the 3,500 Berserkers of New York City as they raised their horns and ran the gauntlet of the circle pits.

With a bit of confusion on my part as to what time the show actually started, the first band of the night GRAND MAGUS was completely missed. While dueling battle with the midtown traffic on a Saturday night, I finally arrived and made it inside the venue and it was only to catch the last two or three songs from  AT THE GATES set.

The venue was Sold Out and the crowd was well charged up when the one and only ARCH ENEMY hit the stage and began to annihilate the stage, and within seconds of the first few notes of “The World Is Yours” a massive circle pit broke out over the front half of floor and immediately following, bodies of crowd surfer began to dump over the barricades at the front of the stage. The talented frontwoman Alissa White-Gluz as usual set the stage on fire with her sheer intensity and beautifully brutal voice. The band ripped their way through a solid setlist that was well mixed with some old and new material, tracks like “Ravenous” that dated back to 2002’s Wages of Sin and closing out their set the classic hit “Nemesis’ off of 2005’ s Doomsday Machine.

After Arch Enemy laid down their brutal assault on the stage of Hammerstein, it was time for AMON AMARTH to take us all on a Vikings quest to Northumbraland.  As the curtain dropped, the Sold Out crowd of 3,500 Berserkers roared in epic proportion as the band took to the stage of Hammerstein to do battle under “Raven’s Flight”. The lines of the battlegrounds were drawn, for the fans it was the pit that opened immediately following the start of the first song, and for Amon Amarth it would be the stage at which they would all pour their hearts out performing during this epic battle of metal. The Viking’s of Amon Amarth were spearheaded by their fearless leader Johan Hegg who showed the Berserkers on the island of Manhattan everything they had to offer. As the battle raged on to the “Deceiver of the Gods”, a demonic skeletal entity that looked like a vikings version of the character Skeletor, appeared from the dark amongst the smoke covers stage trying tp strike fear into the eyes of the Berserkers, a battle to which would prove to be more difficult then first thought of, as this demonic entity would disappear back into the dark in which he first appeared from.  While the Vikings of Amon Amarth continued their battle, we were told a tale of a dragons treasure in “Fafner’s Gold”, witnessed Vikings in battle  during “The Way of The Vikings” and saw nearly the entire floor section of Hammerstein where the Berserkers stood their grounds simply sit down and begin rowing in unison , as if they were true Vikings on a Langskip sailing towards battle for “Shield Wall”. The time had come, SKOAL!, We will drink to glory tonight “Raise Your Horns”, Victory we fought hard and prevailed! The Vikings of Amon Amarth would walk off the battle grounds of Hammerstein and prepare to set sail from the Island of Manhattan, but not before returning to the battle grounds for an encore of “The Pursuit of Vikings” under the “Twilight of the Thunder God”

It would be safe to say Amon Amarth was more than pleased with the Sold Out reception they received from the usually hard ass New York City crowds, seriously how could you not say “Holy shit, that was  Metal as fuck!” Amon Amarth gave us all one hell of a show! The theatrical performance combined with their powerful Swedish blend of Heavy Fucking Metal is truly something, and it just grows on every album nI hear and with every tour I see them on. It’s no wonder why their music just attracts more and more fans to their live shows. Amon Amarth live is something that one can only truly appreciate when witnessed for themselves, it’s just something that really can’t simply be put into words.

The stage production on this tour was off the charts insane! It was true old school metal fashion, (I’m totally showing my age here with this) a page I see being taken straight out of the book from the metal gods themselves Iron Maiden. The show had everything you want in “Metal Show”! For starters there was enormous Viking helmet drum riser with gigantic horns that stood at least 5 feet tall with LED screen eye holes that displayed images coordinated to along with the songs of their set, tons of pyro that blasted giant burst of fire high into the air across the entire back half of the stage. There was some demonic evil skeletal figure, as well as actual Vikings that come out on stage to do battle with one and other. Hell there was even a giant inflatable serpent that stretched the entire length of the stage appearing as it was rising out of the sea during the encore. I could carry on for ever about this stage production.

I feel confident in saying that Amon Amarth are on the road to being the next “metal giants” following the same path as such giants like Iron Maiden, Judas Priest, Metallica, Slayer and Megadeth. One thing is certain only time will tell, but based on the quality of their music, and above all else, the high intense energy and their epic live shows, they definitely more than deserve their place at the table among the metal gods. Skoal! To Amon Amarth!

AT THE GATES SETLIST:

NewYork Based Photographer. Music Enthusiast with a background in Graphic Design. Whether I'm shooting a live event or just out wondering the streets its about capturing the moment.
Previous SOFI TUKKER at Stubb’s BBQ in Austin, TX (10.17.19)
Next Saint Asonia Release Personal Song “This August Day”