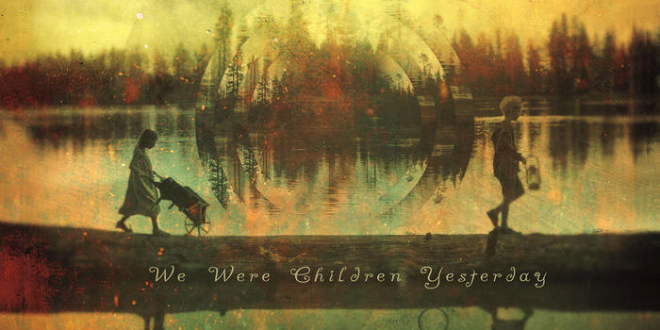 A harmonica moans a grim melody at the start of Brother Spellbinder’s “Aching Eyes,” and in the shadow of its glare we discover a treasure chest of textured string play and siren-like singing just waiting to seduce us in this selection from the band’s new EP We Were Children Yesterday. Eclectic, sharp and charming, We Were Children Yesterday captures the essence of autumnal tonality, summer grooving and a melodicism that stays sweet all year-long, and its seven songs comprise a record that I would deem to be one of the more noteworthy out right now via independent or commercial channels.

“If You Change Your Mind,” “Aching Eyes,” “20 Years Ago – Full Version” and “Birds of a Feather” are lyrical stunners of the most erudite variety, while “Mandalay,” “Woman” and “Red River Valley” lean a bit more on their instrumentation as a means of expressing a deeper narrative, but the duality here doesn’t create as much contrast as it does a strangely harmonious discord. Brother Spellbinder is capable of a lot, and even if it isn’t always presented to us in neatly-kept, professionally garnished packaging, it’s still some of the smarter alternative music I’ve had the pleasure of taking a look at in recent memory.

For being an acoustic-powered record, We Were Children Yesterday’s tracklist feels startlingly larger than life, and in songs like “20 Years Ago – Full Version,” downright anthemic. Despite the minimalist approach that the group takes to the majority of arrangements here, there’s a constant bombast to the content; take “Birds of a Feather” for example. Constructed around its endearing harmonies, it unfurls one lashing of lyrical wit after another, but its instrumental backdrop remains just as sterling a component in the grander scheme of things. That’s not a common find anywhere in pop these days, let alone left of the dial.

The string tones in “Mandalay,” “If You Change Your Mind” and “Red River Valley” are absolutely divine, and frankly some of the best that I’ve heard in a really long time. Through this even-keeled mix, we’re able to appreciate all of their majestic melodies in their natural, non-augmented state, which leaves one wondering just how impactful they would sound in the truly organic setting of a live venue. Brother Spellbinder are working with one heck of a skillset on this record, and thanks to their close attention to detail, we’re offered a front-row seat to a comprehensive masterclass in musicianship and hybrid harmonization.

Indie music enthusiasts really can’t go wrong with the seven sensational tracks included on We Were Children Yesterday, and whether you’ve heard the works of Brother Spellbinder before now or not, this record makes for a fantastic introduction to their one of a kind sound. They’re definitely not the only band in their class distributing sheer brilliance from the underground at the moment, but after hearing their latest release and falling in love with everything that it has to offer, it’s undeniable that they’re one of the absolute best at what they do, regardless of scene politics.