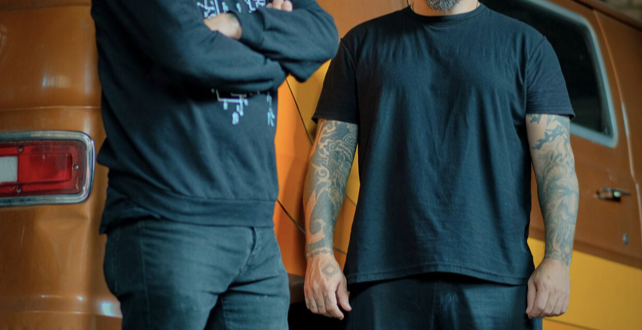 Petbrick — the duo comprising Wayne Adams (Big Lad/Death Pedals/Johnny Broke) and Iggor Cavalera (Sepultura/Soulwax/Mixhell) — have arrived at an audial destination whereby electronic experimentation, hardcore attitude, dystopian dread and in-the-red dementia collide and collude to form a uniquely invigorating assault, custom fit for an accelerated age. This debut explores fresh lunacy anew whereby both members’ past experience — Wayne in a variety of musical guises ranging from punk to breakcore and gabba, and Iggor in a planet-straddling metal colossus whose questing spirit played a crucial role in the music’s evolution – are both profitably employed and left obsolete by a resolutely genre-free onslaught whose spirit remains firmly in the here and now.

Petbrick have just premiered the incendiary, Dante Vescio-directed video for “Coming” at Metal Injection. The song also features vocals from Laima Leyton, who is one-half of the techno x dance outfit Mixhell.

The band previously premiered “Radiation Facial” over at Kerrang! The song features guest vocals by Dylan Walker of Full of Hell. Watch it here.

The band also shared the track “Horse,” which premiered via The Quietus. Listen here and here.

Petbrick will release I on October 25 via Closed Casket Activities in the U.S. It will be released in the rest of the world by Rocket Recordings. Pre-order the album here.

NewYork Based Photographer. Music Enthusiast with a background in Graphic Design. Whether I'm shooting a live event or just out wondering the streets its about capturing the moment.
Previous Album Review: uknowhatimsayin¿ by Danny Brown
Next Gatecreeper Release Video For “From The Ashes”