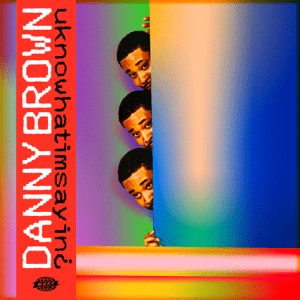 The last time Detroit rapper Danny Brown released an album (2016’s Atrocity Exhibition), the rap’s funniest star chronicled his downward spiral with drug and alcohol addiction. Three years later, Brown gets a chance to show listeners his growth with uknowhatimsayin¿. The album, full of eclectic beats from executive producer Q-Tip, and full of witty bars is a triumph to post recovery life.

Uknowhatimsayin¿ opens with “Change Up,” a song where Danny discusses how he shouldn’t be here, but is thankful for his life. Bars such as, “They thought I was gone, back from the grave; Mind of a master, blood of a slave, heart of a king, stuck in between The devil and an angel on my shoulder when I speak.” shows Danny’s growth as a lyricist. “Change Up” is a powerful opener to an album that gets progressively sillier.

Danny’s pension for hilarious lyricism bursts onto the scene with “Dirty Laundry.” In this cut, Danny takes on the role of a dirty old man discussing not only literal laundry, but the dirty secrets people try to keep from public knowledge. With lines about having sex in a Burger King bathroom, Brown telling listeners to revisit his 2010 debut The Hybrid, and how someone’s giving head so sloppy he thinks she has head lice are just a few examples of why “Dirty Laundry” shows that Uknowhatimsayin¿ is the comedic opus Danny Brown has always strived to achieve as an artist.

After the farce that was “Dirty Laundry,” the jokes continue with “3 Tearz” featuring Run The Jewels, with production by eccentric weirdo Jpegmafia. Killer Mike and El-P’s lines on this song are pure gold. Mike’s verse, climaxing with “And I don’t really give a fuck about givin’ a fuck and who feels that black celebrities ain’t givin’ enough Give ’em the dick.” Mike gives his angriest and funniest performance in a long time. The chemistry between Brown and Run The Jewels make the song worthy of being the final single before the album was released. Jpegmafia’s beats are harsh, grainy, and menacing, which collide with the lyrics like car crash you just can’t look away from. The unlikely trio knock it out of the ballpark on “3 Tearz.”

Another highlight from Uknowhatimsayin¿ is “Best Life.” Fully produced by A Tribe Called Quest’s Q-Tip, “Best Life” highlights the darkness that Danny Brown has overcome to be the person he is today. He discusses growing up in the streets, selling weed, and going to jail; to live the best life he possibly can. The central theme of taking advantage of the only life you have is incredibly powerful. It adds that little bit of seriousness to make the comedy of the album so alluring.

Next is the title track “, where Brown reflects more on his past. With Nigerian Afrobeat artist Obongjayar handling the chorus, Brown continues the album’s streak of self discovery and self-love. The song is a highlight of Brown’s lyrical growth since his first album released nine years ago. Brown shows that he’s capable of writing more than dick and fart jokes in his songs. Danny’s transformation over his past few albums is truly phenomenal to listen to.

Brown closes the album with the jazzy “Combat”. Combined with a surprise feature from Q-Tip, “Combat” closes out the album with a bang. The snazzy trumpet loop is the real MVP of this track. Danny discusses the horrors he’s seen while in prison, as well as the violence he’s witnessed as well. It’s a somewhat somber way to end an album that’s full of darker tones. “Combat” is a great way to close out an album full of mature themes and high concepts.

Although not a perfect album, Danny Brown has solidified his place with rap’s greatest voices. The album’s message of growth and self-love combine to make a fantastic record.  Uknowhatimsayin¿ is a frontrunner for album of the year. This album is a masterclass in production, lyricism, and is a great vibe record.