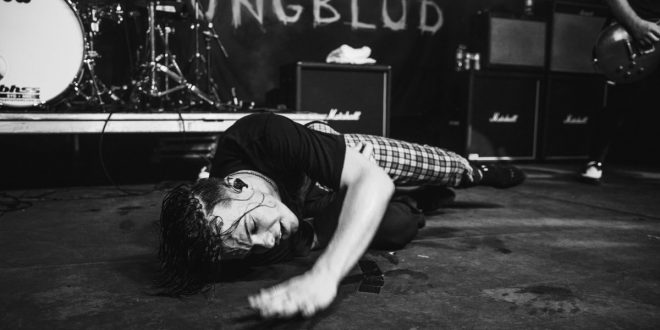 Last night the Toronto chapter of YUNGBLUD’S Black Hearts Club reveled in unity at The Danforth Music Hall. If you’re unfamiliar with the Black Hearts Club, it refers to the band of youths that British pop/punk phenomenon Yungblud has been building over the past year and a half. The mantra for the fanbase addresses everything from acceptance to love and embracing your true self, which was extremely evident during last night’s show. During this time last year, Yungblud was performing to a rambunctious crowd of 200 in the back of restaurant. Last night’s show was a big step forward with a sold-out crowd of 1,500 which showcased the rocker’s impressive growth over the past year.

To commence the evening, Yungblud spared no theatrical element beginning with a five-minute hypothetical police chase booming over the speakers. Authorities were looking for the man himself but before Yungblud could arrive, two masked vigilantes entered the stage with large flags and signaled for the Yungblud logo to start flickering on the wall behind them.

Musically the night began with “21st Century Liability”, the title track to his debut record released last summer. From there he started his deep cuts early with “King Charles”, “Anarchist”, and “Polygraph Eyes”, pleasing the hardcore fans who had been lining up for hours to get a coveted spot on the barricade. Before embarking on a series of hits, Yungblud took the time to thank his dad in the audience, and fittingly went straight into “Parents”, “Medication” and “Loner”.

Yungblud then descended into the crowd to perform “Kill Somebody”, the soft acoustic fan favourite that calmed the crowd down just enough before an electric ending. He ended the night with other favourites including “I think I’m OKAY”, “California” and “Hope for the Underrated Youth”, his powerhouse ballad that advocates for young people fighting against the pressing issues in today’s society.

Just over a year ago, Yungblud was still classified as an underground act in the punk rock scene. He went from playing the afternoon slot on side stages, to recently performing on the main stage at the legendary Reading and Leeds Festival. He’s amassed over 500 million global streams and has had his music placed in major movies and TV shows. Despite the incredible resume he’s built over the past year, his attitude and on-stage demeanor remains humble.

While performing he transforms into a rock n’ roll trailblazer ready to lead today’s youth into the battlefield, however in between each song he descends back to the giddy boy from Doncaster who can’t stop grinning from ear to ear. As mentioned on Music Existence before, Yungblud is the Deadpool of the music industry. He’s the antihero for kids who can’t relate amongst their peers and provides a space where the “Loners” can become family. Last night was evidence of that and more during a special performance from an artist who won’t be playing small venues for much longer.