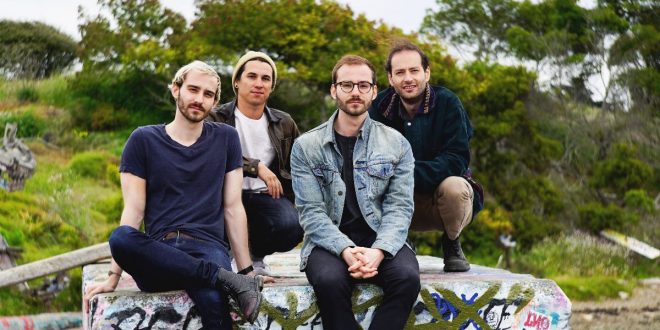 Back in May, Bay Area quartet Super Cassette released “Better in Reverse,” its anthemic, melodic fuzz pop drive resonating with fans for its poignantly portraying the fickle nature of human relationships. Today, the band is premiering the video for their latest single, “Ouroboros,” which expands upon similar thematic leanings.

Set to the backdrop of a somber (and occasionally disorienting) drive toward reconciliation, the video centers around an equally awry relationship, as evidenced by its lyric display of a one-sided text message conversation. Alongside its visuals, the song’s psychedelic-tinged lyrical approach brings the presentation together. Much like the last video, the viewer is ultimately left with a more or less ambiguous outcome.

I come from a family who is passionate about all things music. I learned to sing at an early age, and by 13, had my very own Fender Strat guitar. I tried my hardest at learning all that I could. Because I was born with cerebral palsy, I had to teach myself an adaptive playing style. I learned to write and record my own music, despite these difficulties. In college, I started making great use of my writing abilities by reviewing music, as well as copy editing. I guess it's best to stick with what you know, while welcoming a fair challenge at the same time.
Previous Colony House debut new single “Looking For Some Light”
Next Delain Releases New Single Along With Music Video For “Burning Bridges”