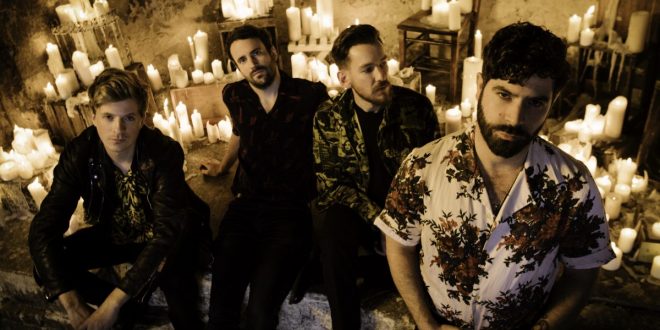 Yesterday, on the heels of their performance at the UK’s Mercury Prize ceremony, Foals debut their new song, “Into The Surf.” In contrast to the two tracks that preceded it, “The Runner” and “Black Bull,” “Into The Surf” captures a very different side to Foals. It’s a dreamy, ethereal soundscape which allows Yannis Philippakis’ haunting but elegant lyrics to soar. “In ‘Into the Surf’ there’s this shadow of death, of someone not returning from a voyage,” he explained in an interview with DIY. “There’s a type of Greek folk song that’s always to do with the immigration of Greek people and how dying on foreign shores is always viewed as the worst fate – to die far away from your home and your family.” Listen to “Into The Surf” now.

Collectively, Every Not Saved Will Be Lost is symbolic of Foals’ trajectory so far. From playing chaotic house parties in their home city of Oxford to becoming major festival headliners across Europe, they’ve earned critical acclaim (NME and Q Award wins, plus Mercury Prize, Ivor Novello and BRIT Award nominations) and fan devotion (1.7 million album sales, plus over half a billion streams at Spotify since 2015) in equal measure.