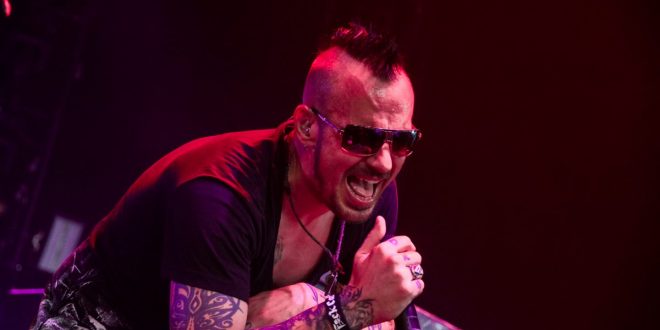 Canadian-American rock band Saint Asonia have shared their brand new video for “The Hunted,” featuring Godsmack’s Sully Erna. The track continues to be one of the fastest growing songs at rock radio over the past few weeks and is poised to break into the Top 20.

“I’m super excited to share ‘The Hunted’ video with our fans,” says singer Adam Gontier. “We worked with PR Brown, who did our ‘Better Place’ video from the first record, again. He’s also done all of Saint Asonia’s record artwork and is absolutely brilliant. He’s an amazing photographer and his vision always seems to line up perfectly with ours. ‘The Hunted’ video sort of has a Little Red Riding Hood vibe to it. But it’s a little more ‘creepy,’ if you will It’s kind of a straightforward song, and I really wanted the video to be simple and visually intriguing. I think we’ve achieved that.”

The band will release their Spinefarm Records debut Flawed Design on October 25. To herald the release, the band has also dropped the new track “Beast.” Exclusive pre-order bundles are available here.

“The thing about Flawed Design is that it took longer than we expected to make,” Gontier explains. “But in the end, because of that, it turned out to be a really good piece of work. There were so many things happening in my personal life when we started the process in early 2017 I basically took a step back, took care of the things I needed to, and I went through a lot of extremely difficult situations I found myself in a bad place. But, when I finally came out on the other side, I focused, we focused, and we made Flawed Design. It’s a very real, vulnerable look into the last few years of my life — the good, the bad, and the ugly.”

He finishes, “I feel confident in saying Flawed Design is, without a doubt, the best body of work/music I’ve ever created. I hope it has the same impact on fans, as it has on me.”