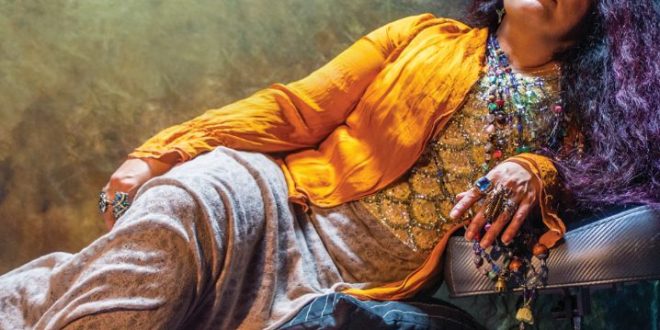 Sayed Sabrina’s “Goodie Two Shoes,” the first single from the full-length album Thou Art That, is a blues track, but Sabrina herself is not a blues singer per say but rather a singer that knows how to sing the blues. There’s a lot more than meets the eye here when it comes to the variety of this seasoned artist from LA. But this track pretty much sticks to a traditional blues feel with contemporary vocal and instrumental qualities, including plenty of jazz inflections for what’s considered more or-less a full-on blues number, with a promo video that sees it all go down in the studio.

The record features the talents of Bobby Watson (Rufus, Michael Jackson), Sarah Morrow (Dr. John, Ray Charles), Gary Herbig (Elvis, Tower of Power), Carlos De La Paz (Cid, Mandrels), and Bryan Head (Dick Dale, Roger Hodgson), but I can’t be certain who plays on this single track. But if I were dig into this artist based that alone, it would be interested from the get-go. Having discovered that after hearing “Goodie Two Shoes” only brings an expectation of what is to be heard on the rest of that release, but it offers a strong look into it.

You can always slice a video one way or the other, but this one stands up to the audio track with some non-musical moments around it to show the vibe in the studio and warm fans up to “Goodie Two Shoes” and the artist herself in one fell swoop. My impression of that alone gives it top marks in both formats, too bad you can’t buy the video in all the way music is marketed with some doing that and some not. If it leads to a fan picking up the music, then it does its job promoting it.

The track starts off with some kicking horns, and Sabrina takes over immediately with a lyrical assault on the senses about giving your soul to people who can appreciate it. These lyrics are second to none with reality and social-political facts about today’s society, and the terminology cliché of ‘goodie two shoes” flies right out the window. This because she turns a new trick on an old phrase and turns it around into a good thing by using it differently in a song. The advisory factor is an over the top win for the artist and the great song.

Sabrina’s career goes way back and includes some punk roots, etc. But this isn’t of that same attitude and shows a lot of growth and maturity as an artist handling her own songs that swing from blues and jazz, to pop and soul. The track is very sassy and clean with some thoughtful words on today’s state of social interaction and responsibility without giving a lecture or a music lesson in the process. In closing, Sayed Sabrina comes out with flying colors and her own contemporary niche on this well produced single release from an album worth looking forward to.