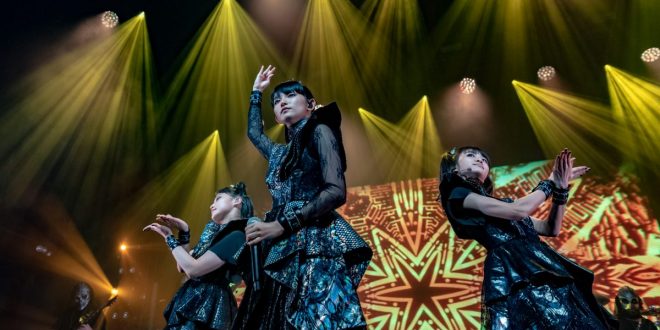 On Sunday, September 15th, The Metal Galaxy World Tour landed at Terminal 5 in New York City bringing with it the Japanese Kawaii metal sensation BabyMetal who brought along the Swedish theatrical metal antics of Avatar.

Avatar opened up the evening like always, dressed in their usual attire reminiscent of a 1700’s royal army, fronted by the court jester personality of Johannes Eckerström backed with a giant logo of individually brightly lit letters that would blast in sequence with the music. Avatar took to the stage kicking off their set heavy right out the gates with “Hail to the Apocalypse”, knocking it out of  the park. Avatar knows how to put on one hell of a show and their lighting is one of the best in the business, the stage is brightly lit with colorful beams of light that shoot high and low into the crowd. Watching Avatar play live is like watching a zany metal circus sideshow of freaks. As always Avatar gave the fans an experience of lifetime with a seventeen song setlist, the setlist included all of the fan favs that included “A Statue of the King”, “Paint Me Red”, “Bloody Angel”, “The Eagle has Landed”, and “Let It Burn”. Avatar went on to close out their explosive set with “Smells Like a Freakhow”.   As the house lights came on Avatar said their good night to the fans and took their bows as they made their way off stage leaving the crowd fired up and ready for BabyMetal.

As the entire crowd stood anxiously awaited with excitement and anticipation for BabyMetal to take the stage, I also found myself a bit anxious, this would be the first time I was to see BabyMetal live so I was very curious as to what BabyMetal was all about, especially after meeting one fan in particular outside who traveled alll the way from Australia just to see BabyMetal live in New York City. Since they came onto the scene in 2014, BabyMetal have made quite a name for themselves, combining young Japanese Pop singers with a heavy metal band, and with their new album Metal Galaxy to be released on October 11th along with a major headlining arena show at The Forum in Inglewood, Ca. the same day, BabyMetal doesn’t seem to be slowing things down at all.

Under the dark red lights of the stage a voice was heard over the house PA reciting the words that would appear on a giant LED screen in the backdrop that read “Are You Ready To Head Bang, led by Su-Metal and MoaMetal and accompanied by the Kami Band, BabyMetal began to march their way out on stage in sync with one and other to the defining roar of 3,000 screaming fans. By the volume of the screams alone I knew I was going to be in for one hell of an experience that night, the screaming cheers for the band were so loud I honestly thought for a second that I was in an arena, it was just insane. Everyone in the crowd had their metal horns raised along the Fox God hand sign while jumping up and down as  BabyMetal opened up their set with “Megitstune” which translates into Vixen. I was completely blown away by the incredible stage presence Su-Metal had during the entire set along with her amazing voice, and to watch her and the other girls perform a choreographed traditional Kabuki style Japanese dance to heavy metal music like a well oiled machine as BabyMetal continued to wow fans with hits like “Gimme Chocolate”, “PA PA YA”, and “Karate”. As they ended their set with “Road of Resistance”, it was without a doubt,  BabyMetal put on one hell of a show and was impressive to say the least.

NewYork Based Photographer. Music Enthusiast with a background in Graphic Design. Whether I'm shooting a live event or just out wondering the streets its about capturing the moment.
Previous Ohana Festival Set Times Announced
Next “Chasing Whatever” Trouble in the Streets