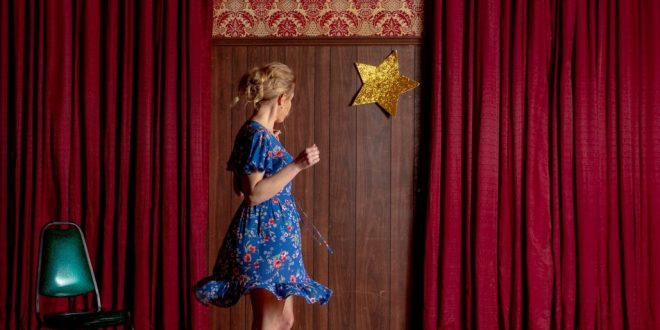 Though her presence and her name may be new to so many, her voice has a reckoning to it. Part old-timey and part siren, Northern California’s Rosy Nolan seems to possess years of artistry woven into a beautiful, angelic voice. Banjo in tow, her nod to yesteryear should be celebrated in her forthcoming album, Footprints & Broken Branches, out September 28. To mark the occasion, Nolan and her backing band, including a full orchestra, will headline Los Angeles’ Hotel Café.

Nolan’s voice seems to cradle the listener down a splendid road of tales, harmony and rich sonic treasures. She has a stoicism to her, yet, nothing about her voice is intimidating. What’s so engrossing about the tracks she’s already presented are the way they honor the past, but in a modern twist, catapult the listener to a modern day moment. It’s as if time stand’s still when Nolan sings.

In “Heaven’s Name” the violin plunks along, providing a soundtrack to a moonlight slow dance. As Nolan sings the lyrics “you seize me” the listener feels an instant connection to the story being shared. In the opening chords to “Return to Spawn”, the tightness to the banjo seems to beg for a sing-along as if the campfire burned into the wee hours. What she lacks for in backing vocal harmony, Nolan more than makes up for with gorgeous string blends and country tones. Her cadence is as soft as a flickering candle. Her lyricism heartfelt and masterful at storytelling.

In “Tumbleweed” Nolan’s poignant voice, accompanied by a jovial banjo, struts along like the blades of grass she sings about. It’s reminiscent of summer drives across the Great Plains; Nolan’s broad strokes she paints with music colors the Midwestern flatlands. She may be from California, but she’s captured the essence and modest beauty the first pioneers may have encountered.

Nolan also reinvents herself and shines most when she’s showing all her artistic endeavors have to offer. Her previous work, Phantom Hymns (2006) has a solid country–pop-rock flavor to it. She spices it up with songs like “Chewy Gum” and “Drain This Poison.” She completed that collection while living in New York and it has a harsher, edgier point-of-view. “Rising Up” captured on YouTube moved Nolan into a simpler, unplugged state. The song moves the listener in a way that feels very fresh. As she lingers on each word (“as it dripped down the café walls”) the listener is absolutely mesmerized by her voice and freeing guitar work.

If Footprints & Broken Branches proves itself, as it looks like it will, Nolan will have continued to stretch her artistic muscles into a more vulnerable, brave artistic point. She’s back in California and to roots, so to speak, and her branching out into Americana, with hints of gospel, classic country and bluegrass seems to have a softened her disposition. Listeners might get lost in the simplicity of Rosy Nolan’s lullaby voice. Truth be told, she creates layers upon layers of rolling strings and stirring American grit in her songs.