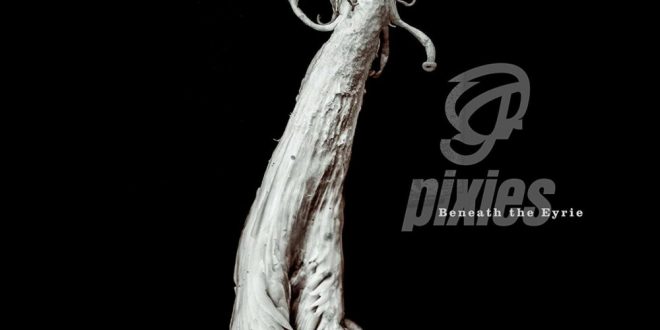 Album Review: Pixies – “Beneath the Eyrie”

Sweet and sour; the balance of these two conflicting flavors are what Boston alternative rock legends Pixies have been perfecting since frontman Black Francis and guitarist Joey Santiago formed the band back in 1986. The band’s blend of metal, punk, and pop resulted in the band becoming one of the most influential rock bands of the ‘90s. As the turn of the millennium rolled around, Pixies released their weakest albums back to back. 2012’s “Indie Candy” and 2016’s “Head Carrier” both felt uninspired and half-assed, with the band trying to catch that sweet, sweet 90’s lightning in a bottle yet again. Their newest album “Beneath the Eyrie”, Black Francis and company went back to the formula that made the highs of their heyday so iconic.

The album hits the ground running with the chilling “In the Arms of Mrs. Mark of Cain”. The opening guitar chords are thick, sludgy, and sound like a riff left off of Nine Inch Nails’ “The Downward Spiral”. Black Francis’ vocals are toned down to the point where he takes a back-seat to the riffs Santiago presents. The song gives the album a harsh sound that will later be balanced out with softer, poppier songwriting.

Next is “On Graveyard Hill”, in which bassist Paz Lenchantin gets to shine over Francis’ howling vocals. The song’s aggressive tone flashes back to the band’s earliest recordings, where fast, messy riffs were combined with nonsensical lyrics (i.e. “Bone Machine” off of their debut album “Surfer Rosa”). The band’s chemistry and passion on this track create a sense of pure glee. The band’s use of heavy bass lines paired with guitars that are as perfect of a match as it gets.

The album drastically shifts tones with the poppy folktale that is “Catfish Kate”. Francis assumes the role of an overall storyteller, describing how the love of his life becomes the immortal Catfish Kate. The lyricism is silly, fun, and as poppy as it gets. Francis and Lenchantin’s vocals blend perfectly together, giving the song a vibe of romantic nostalgia. The song reminds listeners of the band’s previous material from 1989’s “Doolittle” (especially “Here Comes Your Man”), the song is a brilliant showcase of the band’s stylistic versatility. “Catfish Kate” is the true gem of “Beneath the Eyrie”.

Another highlight of the album is the Tom Waits’ inspired “This is My Fate”. Where Francis does his best impression of the quirky crooner, along with walloping percussion from drummer David Lovering. The upbeat instrumentals are in direct conflict with the song’s brooding and dark lyrics. This conflict is jarring when heard for the first time, but somehow works. The song is a risk that only half paid off.

For as many highlights “Beneath the Eyrie” has, the album has its fair share of duds. “Los Surfers Muertos” and “Silver Bullet” feel undercooked, as well as uninteresting as far as instrumentals are concerned. Although the album runs a crisp thirty-eight minutes, these two songs in particular really drag down the album’s pacing. If these two songs were included as bonus tracks on a deluxe edition of the album, that would’ve made more sense than including them with the rest of the otherwise airtight tracklist.

Pixies came to please and entertain with “Beneath the Eyrie”. Not only is the album their best album of the twenty-first century, but should be discussed among their classics of the ‘90s. The album’s highlights balance the sweet sounds of “Catfish Kate”, and “Death Horizon” with the sour, eclectic tones of “On Graveyard Hill” and “This is My Fate”. Although not perfect, the fact that Pixies put out an album that was of substantial quality is an achievement in and of itself. The old-school sound of Pixies is alive and well in 2019.