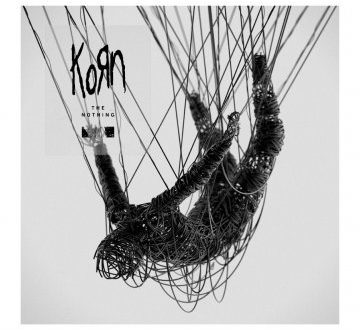 Album Review: Korn – “The Nothing”

The Nothing is Korn’s newest album. It’s their 13th album and crazy enough, was released on Friday, September 13th. The title describes the setting where Jonathan wrote this album. He lost his wife August of 2018. The Nothing is an emotional, deep, and what the grieving process sounds like after somebody has lost someone close to them. From the opening track, “The End Begins”, starts with the classic bagpipes Korn is known to use in their songs, to a song that doesn’t end with any guitars or drums, just Jonathan sobbing, and it’s real. You can feel the pain in his voice.  This album is almost like a process for Jonathan to get his feelings out that he has been holding onto. Each song is that of a different cycle or stage of grief. “Cold” is a song that fights pain while tracks like “The Darkness is Revealing” is unsure and he questions what’s going on. “Idiosyncrasy” has one of the most powerful musical moments of the album, where Jonathan shouts “God is making fun of me. He’s laughing out there. I can see”. You can tell this isn’t just a verse in the song, this is real, this is the pain he is feeling at that very moment. Each time he repeats it, the angrier it gets. This intensity is matched with two words in the last track of the album, “Surrender to Fail”, “I Failed”. This track brings you back to the beginning where he is lost. He sobs during this as he repeats “I Failed”. You can truly feel is sadness, pain, and emotions in this album. But, like most musicians and songwriter, they take their pain and suffering and turn it into music for us, the fan, to be able to relate and try to make sense of things we are going through. This album is for Jonathan. This is for him to try and battle his sadness, we are just here to listen. This album is dark, heavy, and therapeutic. After 20+ years, Korn brings another exceptional album. The Nothing is out now to purchase.

Catch them on tour now!

Sunday, October 13th at the Aftershock Festival in Sacramento, CA