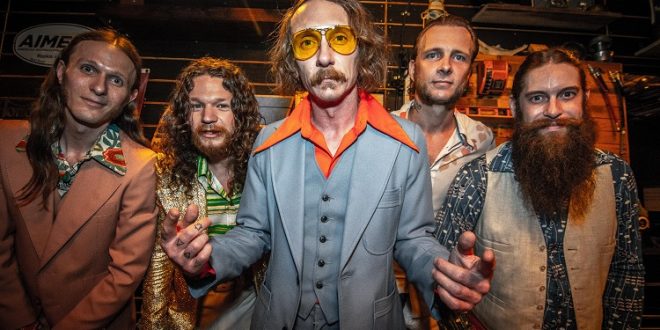 Arizona based boogie rock band Black Magic Flower Power has set aside time from their intense touring schedule to release the official music video for their new single, “Funky Town Sex Machine” watch it below.

“Wanting to show the true funkadelic style of this project and for people who have not seen us live, this song and video are a glimpse into the fun and fresh world we are creating.” says the band talking about the new video.

Black Magic Flower Power has coined the phrases “Stoner-Disco” and “Desert-Boogie” to describe their unique blend of Disco, Pop, Psychedelic Rock & Funk. BMFP is a quintet comprised of synth guitar, clavinet, slap bass, wah wah, strings, horns, hook laden vocals and percussive disco beats. It’s impossible to not be transported back to the golden age of roller disco and classic cop shows when drinking their special acid laced Kool-Aid dialed into a radio station that plays Issac Hayes, The Cure, Beck, & Eagles Of Death Metal simultaneously. The band performs 150 + shows a year and resides on the outskirts of the Sonoran Desert when not on the road.

Previous Live Review: BANKS at Rebel in Toronto, ON (09.03.19)
Next Interview: Chloe taking the Reins on her first solo release