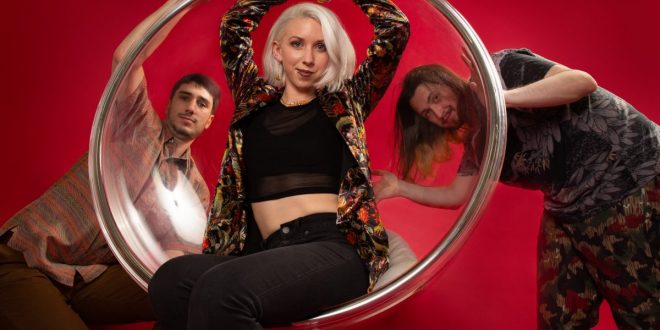 Mint Trip is a Los Angeles-based alternative pop band that’s not afraid to take risks. Whether experimenting with intricate rhythms and atmospheric soundscapes or performing melodically driven music with strong vocal hooks, the young band’s distinct mix of traditional and modern pop influences draw a fine line between the digital and analog worlds.

Their sonic palette features the vocal prowess of Amy Gionfriddo, whose dynamic voice can be both soothing and fierce, the pulsing rhythms of bassist Brian Gross, and the textured guitar work of Max Molander.

After graduating from the University of Miami’s Frost School of Music, the trio relocated to Los Angeles where they song-write, produce, and handle business together. “We’re also each other’s best friends” says vocalist Gionfriddo. “We’ve all learned each other’s tricks of the trade, which has made us stronger as individuals and as a group.”

“Because our backgrounds are split between music engineering, jazz, and classical vocal performance, we have a strong foundation that allows us the freedom to experiment with our instruments at the arrangement level and really explore what colors and textures we can create at the production level,” notes Gionfriddo.

Animator, the band’s debut album is out today on all digital platforms via Blue Élan Records on Friday, September 6th. After releasing three singles this year (“Glow”, “Skeleton in a Spice Jar”, and “Animator”), Mint Trip is proud to share Animator with the world.