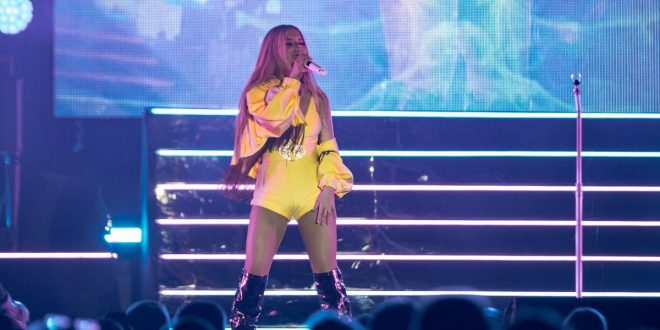 Maren Morris appeared on last night’s episode of “Late Night with Seth Meyers” for a chat and performance of her hit single, “The Bones.” Watch the performance now.

Morris visited Seth Meyers ahead of her sold-out Radio City Music Hall performance this Friday, which kicks off the next leg of her GIRL: The World Tour with further stops at The Met in Philadelphia and the Greek Theatre in Los Angeles. She will also support Miranda Lambert on her Roadside Bars & Pink Guitars tour this fall. Visit marenmorris.com for full tour details.

The 29-year-old singer-songwriter from Arlington, Texas leads this year’s list of Country Music Association Awards nominees with six nominations. This is Morris’ second time leading the CMA nominee list in four years, and the strongest showing by a female nominee since Miranda Lambert garnered nine nominations in 2014. Morris is in the running for Album Of The Year, Female Vocalist Of The Year, Single Of The Year, Song Of The Year, Music Video Of The Year, and Musical Event Of The Year.

This year Morris received five Grammy nominations and was awarded with a Billboard Music Award for Dance/Electronic Song alongside Zedd and Grey.

Morris won a Grammy Award for Best Country Solo Performance at the 2017 Grammy Awards, was named New Artist of the Year at the 50th Annual CMA Awards, Top Country Female Artist at the 2018 Billboard Music Awards and New Female Vocalist of the Year at the 52nd Academy of Country Music Awards. She was also the most played female artist on country radio in 2017 and 2018.