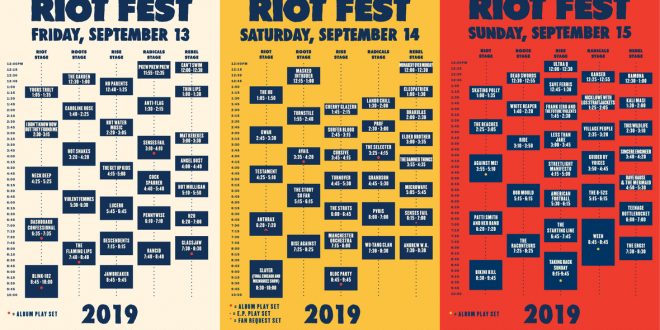 Riot Fest Sucks Pale Ale is a light amber-colored American Pale Ale that has a crisp, balanced hop aroma, citrus flavor, and notes of lightly toasted malt—a perfect beer for a mediocre festival! The beer will be available for sale in limited quantities at the festival.

Friday’s headliners Blink-182 (performing Enema of the State), The Flaming Lips (performing Yoshimi Battles the Pink Robots) and Jawbreaker will be joined by Rancid, Violent Femmes, Descendents and more; Saturday will be helmed by Slayer (playing their final Chicago & Milwaukee area show), Rise Against, and Bloc Party (performing Silent Alarm), joined by Wu-Tang Clan, Manchester Orchestra, The Story So Far and many more; Sunday‘s headliners include the recently reunited Bikini Kill, The Raconteurs (their first Chicago show in 11 years), Ween (performing The Mollusk), Patti Smith and her band, and Taking Back Sunday (performing Tell All Your Friends + Louder Now)—leading a slew of killer bands to close out the fest.

NewYork Based Photographer. Music Enthusiast with a background in Graphic Design. Whether I'm shooting a live event or just out wondering the streets its about capturing the moment.
Previous Dave Navarro and Billy Morrison Announce Expanded Line-Up For Second Annual “Above Ground” Concert Benefitting Musicares®
Next King’s X Cancels Upcoming European Tour