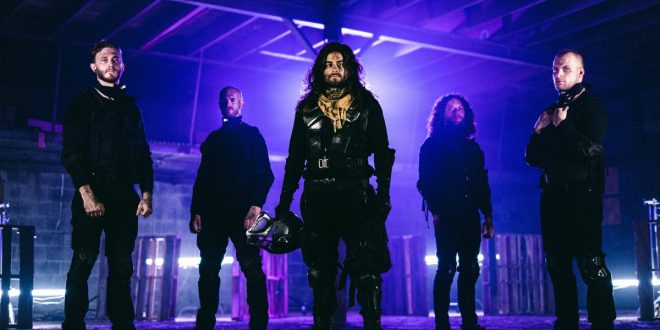 St. Louis-based heavy metal band Hallow Point will be dropping their debut full-length Blacklight on September 20th, but today you can see a thrilling music video for the first single “I’m Alive.”

“I’m Alive” is a powerful reminder that as long as we’re breathing, we have the ability to push through any obstacle we face in life. “The concept for the video came from our director, Josiah Moore,” says guitarist Bill Brynda. “He wanted to incorporate a Sci-Fi video game feel with Tony (vocals) as the main character. The video takes you through as he suits up to prepare to fight the impending monster. We were totally stoked on his idea because in many ways Tony’s character exemplifies the meaning of the song.“

With influences consisting of Metallica, Trivium, & Lamb of God, Hallow Point infuses modern day melodic hooks with the songwriting progressions, reminiscent of their forefathers. Their intense and energetic live show has given them the opportunity to share stages with bands like DevilDriver, Ice Nine Kills, Like Moths to Flames and Bad Wolves.

The band intends to forge new paths in coming years as they continue their rigorous touring schedule around the continent to support their new LP. Hallow Point is determined to push the boundaries of what is considered possible within their genre by bringing their music to the masses. It is the band’s highest hope that fans will find solace, comfort, motivation, and empowerment through their music.

Listen to “I’m Alive” now on Spotify, Apple Music, and all other major online streaming services.