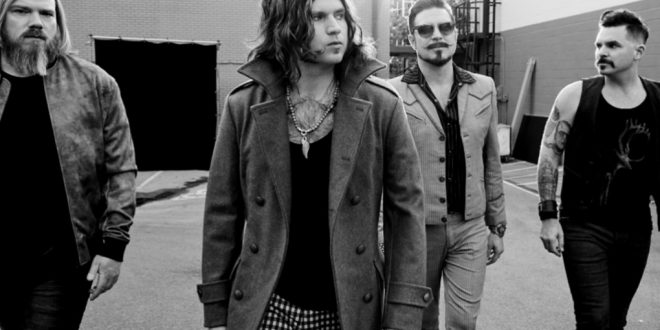 Toronto was given quite the treat Monday night when rock n’ roll revivalist Rival Sons were in town for a summer show under the stars. Only the second show of this leg, the band has been on the road extensively since the release of their sixth album Feral Rootsback in January. The album was well received critics, and even better by radio, as their single “Do Your Worst” spent 17 weeks at Number 1 on the Rock Charts.

Their show in Toronto, (the band’s second Toronto appearance this year) was a part of the Canadian National Exhibition’s annual Bandshell Concert Series. The CNE’s Bandshell has a long history of hosting shows for legends like Neil Young, Pearl Jam and Guns N’ Roses. In recent years, the CNE revived the iconic outdoor stage, and has since had a good track record of shows for the end of summer festivities.

To get the night started, The Standstills opened the show with their aggressive yet impressive country-rock vibe. The duo’s uncanny comparisons to The White Stripes saw Renée Couture on drums and Jonny Fox upfront on lead vocals and guitar. They got the initially small crowd warmed up, before the Bandshell quickly filled up for the arrival of the main act.

Rival Sons came out swinging with heavy hits like “Back in the Woods”, “Sugar on the Bone” and “Open My Eyes”. The crowd was instantly energized, and the outdoor spaced allowed for lots of dancing and head banging, without the crowdedness of a typically small venue.

From there, the band played hits from Feral Roots, including “Too Bad”, “All Directions” and “End of Forever”. Midway through the set Rival Sons played “Feral Roots”, the acoustic driven title track from their latest album. The song’s calming and melodic nature starts with wise words from lead singer Jay Buchanan, before Scott Holiday’s heavy riffs bring the intensity in. A new crowd favourite, this track is a treat to see live with audience participation at its peak. To end the set the band played heavy hitters, “Electric Man” and “Keep on Swinging”.

After a momentary break, the six-piece came back to end the show with their whole hearted, sentimental tune “Jordan”, the influential, anti-hate anthem “Shooting Stars” and finally “Do Your Worst”. The evening was filled with rock n’ roll revelry, that saw each bandmate giving it their all. Jay Buchanan utilized his voice to the max on each track and provided the raspiest of howls through the entire evening. Scott Holiday’s unconventional guitar riffs kept people on their toes throughout the set, while drummer Michael Miley’s fan engagement ensures everyone in the audience feels apart of the show.

With the sounds of a seventies making a resurgence in rock music, Rival Sons are the perfect band to spearhead the rock n’ roll trend going forward. Their album Feral Rootswill surely make waves during award season and contains the perfect set of tracks for Milliennials and Gen Z to capture the essence of music from generations past. The band is currently on tour with Canadian rock duo Crown Lands, whose Rush-inspired drums and Zeppelin-esq vocals only add to the nostalgic feel. This band is a treasure to witness live and proves that rock n’ roll will live on in 2019.