Home / Interview / Introducing: Damn Your Eyes – new album “Kill the Outside” out now 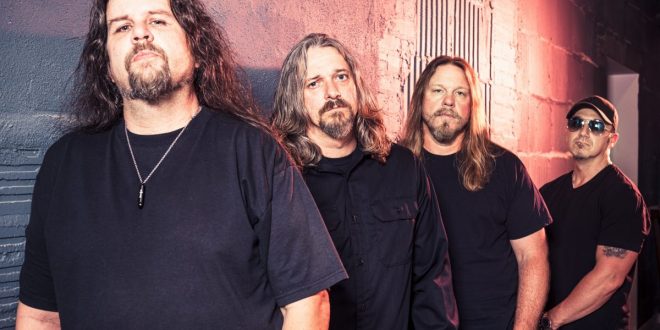 Introducing: Damn Your Eyes – new album “Kill the Outside” out now

Damn Your Eyes may seem new to the scene, but they are anything but green. The band – formed by former members of We Are The Enemy and Bonesmith, plus a current member of Black Water Rising – came together in 2015 and immediately hit the ground running. As respected musicians in their local scene with extensive recording experience, the band quickly recorded an EP, released it to local acclaim, and  rapidly returned to the studio to record  Kill The Outside.

Kill The Outside showcases a mixture of styles, making for a truly dynamic and emotive collection of tracks. In addition to the metal radio-ready “Ascension”, mellow head-bobbers like “Burn” echo grunge and stoner metal influences, while standout track “Low Road” kicks off with a Type O Negative-esque intro riff before quickly transitioning to full-on antagonistic southern groove metal. Slow and low, grooving “Dirty Viper” tells the intense and personal story of a friend who committed suicide by heroin overdose. Tracks like “Punk Fuck” kick it up a notch, while another standout track, the heartfelt “Slower”, brings the tempo down while telling the opposite story of “Dirty Viper” – an uplifting tale of wonderful results after making the decision to change oneself.

I always had the bug. My family was very music orientated, we would play music in the house or my dad would play his guitar and we would all sing. 3-4 part harmonies. I picked up the guitar around 14 and I was off to the races.

Prudential Center in New Jersey when I opened up for the original Misfits as part of another band. With Damn Your Eyes, it will be our upcoming show with Crowbar at Blackthorn 51 in Elmhurst, NY on August 27th.

What does it take for a band to stand out in a musical environment like the one you’re from?

Great songs. That’s the only thing that gets a real band off the ground and keeps them on top.

We are an intense band that’s tight as hell. We are very serious about our craft but we also like to have fun. We will take you through a wide range of emotions.

Do you typically write your own songs?

We only write our own songs. You can’t be genuine if you’re playing someone else music.

What should people expect from you in 2019 aside from your new album (tell us a bit about that as well)?

We hope to add a ton of shows to our schedule. Get out there and win over crowds. The only thing I can say about the album is give it a honest listen – I dare you not to like something off of it. It’s got something for everyone and we are very proud of our album, Kill The Outside.

Alabama. Charlevoix Michigan at the Castle. My Uncle Rick took me when I was up there visiting. I was probably 9 or 10. There was an unfamiliar and funny smell at that concert [laughs].