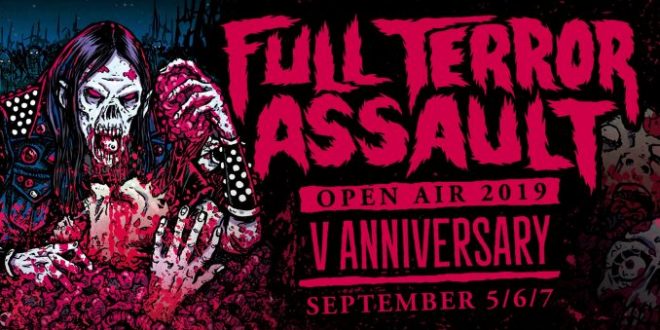 Additionally, Full Terror Assault has announced Crisix, Meet the Mailman, Smash Potater and Through N Through as the artists playing the festival’s Thursday night pre-party at the Cobra Lounge in Chicago.

“One of the main goals of Full Terror Assault is to showcase the underground metal scene,”the Full Terror Assault team says. “Our Chicago pre-party is just another way for us to do that. The lineup is a combination of bands playing the festival, as well as some underground favorites who are not playing the festival. This year we have Spanish thrashers Crisix for their first ever U.S. show, the Canadian heavy metal band Meet the Mailman for their first Chicago show, and the locals Smash Potater and Through N Through. So come out, support and discover the next generation of metal!”
On the grounds of Full Terror Assault, attendees will find a home away from home nestled within the picturesque Shawnee National Forest, with over 100 acres of wooded campground land, scenic lakes, and even a beach! Best of all – camping is free, with upgrades and trailer/RV/golf cart passes available via www.fullterrorassault.com.
In addition to the festival itself, fans will enjoy campsite and costume contests, a morbid metal market, food vendors, after parties featuring even more killer bands, and a DJ to keep the party going all night. Specifically, on September 4, the festival will throw an exclusive early-camper beach party featuring a DJ spinning tunes ’til the party stops! Please note, Full Terror Assault Open Air Festival is completely BYOB/BYOA.
Full Terror Assault Open Air Festival is located within a five-hour drive of major cities such as Indianapolis, St. Louis, Louisville, Nashville and Cincinnati, and roughly six hours from Chicago, Atlanta, Columbus and Kansas City.
Full Terror Assault Open Air Festival is an experience designed to bring metal fanatics of all walks of life together for a celebration of extreme music without breaking wallets. One-day Saturday passes are now available for $66.60 and two-day GA passes for September 6 and 7 start at just $79.99, including access to camping. Information and additional pricing for two, three and four day GA passes, pre-party passes, ultimate VIP passes (including merchandise, swag bags, backstage access, and beyond), additional accommodations, vendors and more are available via www.fullterrorassault.com. Tickets for the Cobra Lounge pre-party are available at https://www.eventbrite.com/e/full-terror-assault-chicago-pre-party-tickets-66890809211.
Full Terror Assault Open Air Festival is an independently run event managed by a team of passionate, hard-working music fans – including a promoter who has been involved in the underground and extreme music for over 25 years. The festival originated with the goal of providing fans a true open air festival atmosphere without having to travel to Europe, and each year that goal has been met, with stories of the festival’s success spreading by word of mouth online and in the underground. Previous Full Terror Assault Open Air Festivalheadliners include Obituary, Napalm Death, Demolition Hammer, Death Angel, Overkill, Venom Inc. and more, and last year, the festival was chosen as one of the only events to screen “Slave To The Grind” – a recently released grindcore documentary by Canadian filmmaker Doug Brown. 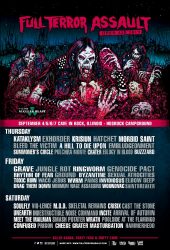 NewYork Based Photographer. Music Enthusiast with a background in Graphic Design. Whether I'm shooting a live event or just out wondering the streets its about capturing the moment.
Previous Hot Breath Set To Release Six Track Debut On October 18th
Next Underoath Release Video For “Wake Me”