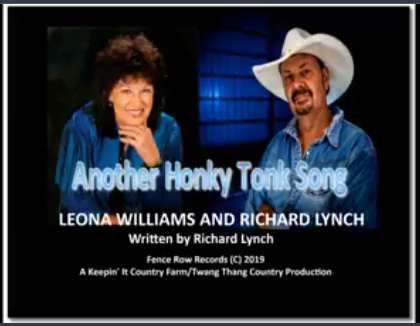 The Independent Country Music Hall of Famer and radio airplay chart-topper has released “Another Honky Tonk Song,” a duet with Leona Williams.

While being on tour in Texas, I was hearing those two-stepping songs, and I wanted to write one. It was a natural to include a real country singer such as Leona Williams on this song.”— Richard Lynch

Country music singer-songwriter Richard Lynch has released several successful duets over the past few years. “Love Tattoo” (with Ronnie McDowell), “Back In Love Again” (with Rhonda Vincent), and his last single, “Keyboard Cowboy” (with wife, Donna Lynch) are just a few of the #1 hits Richard has teamed up for. On his latest award-winning album, “Think I’ll Carry It On,” Richard Lynch invited Top 10 Billboard Country chart artist Leona Williams to add her talents to one of his self-penned tracks, “Another Honky Tonk Song.”

“While being on tour in Texas, I was hearing those two-stepping songs, and I wanted to write one,” says Richard Lynch. “It was a natural to include a real country singer such as Leona Williams on this song. Thanks Leona, for sharing your vocals on this record.”

“Another Honky Tonk Song” is being released to country radio, worldwide.
https://open.spotify.com/track/3vBQfNrDJjJ4h9lRsrAjU1?si=YLm03qBuSd-f7GAQ7CA1kQ

ABOUT LEONA WILLIAMS: Leona Belle Helton was born January 7, 1943 in Vienna, Missouri. Active in her family’s band since childhood, she had a radio program on KWOS in Jefferson City, Missouri when she was fifteen. Later on, she worked as a bass guitarist and backing vocalist in Loretta Lynn’s road band. By 1968, Williams signed to the Hickory record label and released two singles: “Once More” and “Country Girl with Hot Pants On.” In 1976, she recorded the album San Quentin’s First Lady for MCA Records with The Strangers, which was the first country album recorded by a female artist inside a prison. She also joined Merle Haggard’s road band The Strangers in the mid-1970s, supplanting his estranged wife, Bonnie Owens. Leona wrote two of Merle’s No. 1 hits, “Someday When Things Are Good”, and “You Take Me For Granted”. She also wrote songs for Connie Smith–“Dallas”, Loretta Lynn–“Get Whatcha Got And Go”, and others. Between 1978 and 1983, she was married to Haggard, and in 1978, the two charted in the country Top Ten with the song “The Bull and the Beaver.” She recorded two singles for Elektra Records in 1981, and charted another duet with Haggard titled “We’re Strangers Again.” Williams continues to tour with her son, Ron. http://www.leonawilliams.com

Previous CRX debut “Get Close” ahead of new album release next week
Next Gallery: Saves the Day at Rex Theatre in Pittsburgh, PA (08.10.19)