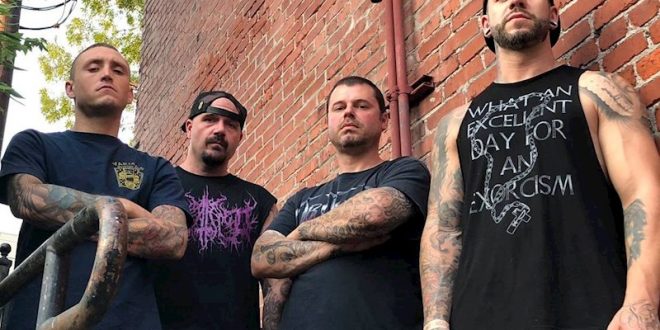 On August 9th, PATHOLOGY will release their latest album, Reborn to Kill, via Pavement Entertainment. 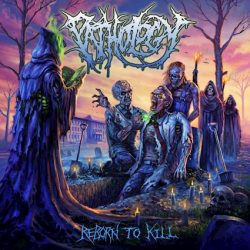 PATHOLOGY is epitomized as the ultimate death metal assault to the ears. The band’s hunger to churn out bludgeoning metal coupled with meaningful themes instantly separates them from the rest.

PATHOLOGY’s current formation stands at its strongest with Dave Astor on drums, Daniel Richardson guitar, bass player Richard Jackson and vocalist Obie Flett to diversify the perfect lineup. Revealing an intense mixture of brutal riffs, crushing drums and imagery so blood-soaked, sickeningly twisted and filled with death that it’s impossible to look away.

Brimming with heavy grooves, and a tight, relenting style, PATHOLOGY delivers savory slabs of brutality Make no mistake; PATHOLOGY is not in any way suitable for a weak stomach – the onslaught of rumbling grooves coupled with guttural growls leaves fans old and new assured of the presence of PATHOLOGY’s brutality.

The group refuses to tone down its dangerously high level of hostility, wreaking havoc on anything that dares to step into its destructive path. Breaking the mold to create and maintain a unique, raw sound has skyrocketed PATHOLOGY to the top of the death metal elite. Championing their reigning status to stand strong outside of the mainstream solidifies PATHOLOGY as the most forward-thinking merchants of mayhem around.

NewYork Based Photographer. Music Enthusiast with a background in Graphic Design. Whether I'm shooting a live event or just out wondering the streets its about capturing the moment.
Previous Halloween Release First Live Single/Video “Pumpkins United”
Next Anamorph Reveal New Track “Overcome”