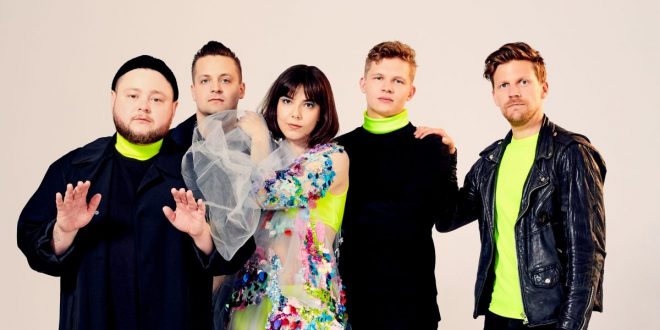 Last night Of Monsters and Men performed “Alligator” and “Wild Roses” on Jimmy Kimmel Live! in celebration of the release of their new album Fever Dream. Check out both performances now:

On the new album the band said, “We are so excited to share with you our third album “Fever Dream.” The album was written and recorded in Iceland. Over the last few years we’ve been slowly but steadily building our own studio. Having that place to ourselves gave us the time and space to be creative and expand on our sound and get lost in our own little world. The album is heavily influenced by being open to changes and unafraid of expressing yourself. We set out to explore the different ways we could go about writing and arranging these songs, playing around with different instruments and techniques along the way such as synths, sampling and extensive vocal arrangements which led us to a new and exciting place sonically. We set out to embrace the chaos that comes along with creating and focused on making this album feel light and fun. It’s about yearning for something greater, feeling content in your loneliness, embracing your vulnerability and wanting to feel present in a moment.”

The group preceded the record’s arrival with a pair of rising singles. Not only did “Alligator” recently cross the 6 million threshold on Spotify, but it also made history by completing “their quickest climb to #1 on the Adult Alternative Songs Airplay Chart,” as reported by Billboard. Not only has the song held the #1 spot for two weeks and counting but has vaulted to Top 5 at Alternative radio. Meanwhile, the follow-up single “Wild Roses” racked up 1.7 million Spotify streams.

This fall, the band return to the States on their North American headline run, FEVER DREAM TOUR. It kicks off September 4 in Washington, D.C., rolls through arenas and theaters in major markets coast to coast including New York’s Radio City Music Hall on September 5th, Boston’s Rockland Trust Bank Pavilion on September 8th, Toronto’s Budweiser Stage on September 11th, and Chicago’s Aragon Ballroom on September 13th. Check out the full itinerary below and purchase tickets at http://www.ofmonstersandmen.com.